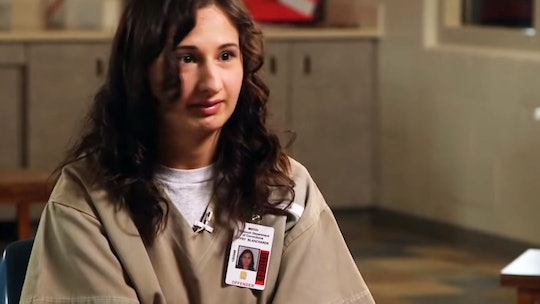 The public has been enthralled by Gypsy Rose Blanchard's case since the story first unraveled in 2015. Since then, HBO has released a documentary series called Mommy Dead and Dearest and Hulu unveiled The Act, a true crime series starring Joey King and Patricia Arquette. Now with all the buzz surrounding the success of the show, fans have been getting more curious than ever about the details of the case. Luckily, recent interviews with Gypsy Rose Blanchard and those closest to her can give fans some closure on how Gypsy Rose is doing today.

For those of you unfamiliar with the case, Gypsy was born to Dee Dee and Rod Blanchard. According to People, experts found that Gypsy was a victim of Munchausen syndrome by proxy, a form of abuse where a guardian will induce or make up an illness in their child to gain sympathy, attention, and money. As a result, Gypsy spent most of her life believing that she was sick. In June 2015, Gypsy's boyfriend, Nicholas Godejohn, stabbed Dee Dee to death in her Springfield, Missouri home. Gypsy helped plan the murder, and both were sentenced to prison.

Since her arrest, Gypsy has given a number of interviews that will certainly satisfy anyone who craves to know more about the case.

In late 2018, ABC News released a 20/20 special in which the details of Gypsy's case were uncovered even further. Speaking to 20/20, Gypsy explained how she felt about Dee Dee, even adding that her mom not only treated her like she was sick, but was abusive and would not feed Gypsy for days after an argument.

"The prison that I was living in before, with my mom, it’s like, I couldn’t walk. I couldn’t eat. I couldn’t have friends, I couldn’t go outside and play with friends or anything," Gypsy said, per The Washington Post. "For a long time I believed we were best friends. When I was younger, she was my best friend, other than my stuffed animals.”

In 2017, Gypsy made an appearance on Dr. Phil, where she discussed the alleged abuse Dee Dee inflicted upon her and her thoughts on her life now — and it's complicated.

"I'm glad that I'm out of that situation," Gypsy revealed when Dr. Phil asked if she was happy that Dee Dee was dead. "She forced me to be in a wheelchair, forced me to go to doctor's appointments that I didn't need."

Gypsy also explained that the murder wasn't justice, expressing remorse for the act. "No, she didn't deserve what happened," she told Dr. Phil. "If anything, she just deserved to be where I am."

Following the premiere of Mommy Dead and Dearest on HBO, HelloGiggles interviewed Gypsy's stepmom, Kristy Blanchard, who spoke on behalf of her step-daughter. Kristy shared where Gypsy hopes to be when she gets out of prison.

"She had told me that one day, she hopes when she gets out, that she wants to be able to grow a family," Kristy told the publication. "And she had mentioned that to one of her cellmates, and her cellmate said, 'Well, aren’t you too scared to raise your child like your mom did?' And she said, 'What I have learned is how to not raise my child how my mom raised me. I am learning how to raise my child by [Kristy,] my mom I have now. With compassion, and with love, and being honest, and being there for your child for all the right reasons.'"

As for how Gypsy felt about The Act, it looks like Gypsy does not approve and will be seeking legal action. In an email to Bustle, Gypsy wrote:

I am unable to watch The Act. However, I feel it is very unfair and unprofessional that producers and co-producer Michelle Dean has used my actual name and story without my consent, and the life rights to do so. Therefore, there will be legal action taken against the show's creators. I want to share my story and bring awareness about Munchausen by proxy, in the hopes that I can encourage those who might be experiencing abuse to speak up, because someone WILL listen. No child should ever be abused especially from their parent.

While Gypsy may not approve of the Hulu series, the hype continues to build and fans are growing increasingly interested in Gypsy's story.