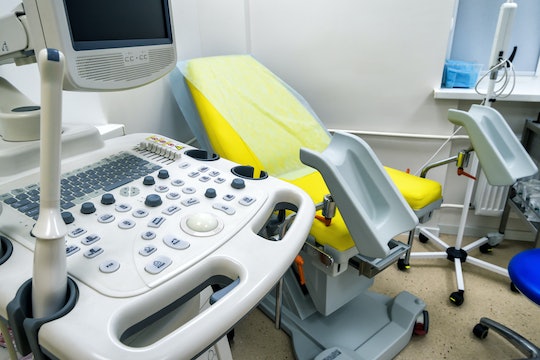 This Iowa Law Would Outlaw Abortions After A Fetal Heartbeat, & It Could Be Deadly

Most people don't discover they're pregnant until about six weeks of gestation, which is usually around a week or two after their first missed period. At this point, if they choose to have an abortion, they can do so legally — but not in Iowa, at least if GOP lawmakers have their way. That's because lawmakers are trying to restrict the medical procedure to the first few weeks of the first trimester. If the law passes, Iowa would be home to the most restrictive abortion law in the country, and it could have deadly consequences for everyone in the state.

While Iowans were sleeping, Republican members of the Iowa House passed a draconian anti-choice bill, largely along party lines, that would ban most abortions after a fetal heartbeat is detected, which is usually around six weeks of gestation, according to The Chicago Tribune. The legislation, which was approved in nearly back-to-back chamber sessions shortly after 2 a.m. local time, would only allow for abortions at this point if a pregnant person's life is in danger, and in some cases of incest and rape, The Tribune reported.

The bill would also prohibit the use of fetal tissue except in the cases of diagnostic or remedial tests or procedures to determine "the life or health of the fetus," to dispose of a fetal body part, and fetal tissue testing for diagnostic or forensic purposes. Any other use of fetal tissue — for example, banking stem cells in order to use for future treatments — would be restricted, according to the broadly written provision.

During the House floor debate that started Tuesday afternoon, Rep. Vicki Lensing, a Democratic lawmaker from Iowa City, said in response to the draconian bill, according to The Chicago Tribune:

How dare we think that the privacy and decisions of a woman and her medical choices are up to us to determine? I am personally offended by this bill that seems to second-guess a woman's ability to make an unintended and difficult decision.

The bill heads to Gov. Kim Reynolds desk. The Republican governor, who is a staunch abortion opponent, has not said publicly whether she will sign the bill into law, according to The Chicago Tribune. But Brenna Smith, the governor's press person, told The Tribune in an email that Reynolds is "open" to doing so because she is "100 percent pro-life and will never stop fighting for the unborn."

The Iowa bill is not the first piece of legislation that's tried to make abortions illegal before the first trimester is over. In 2016, Ohio Republicans pushed a similarly extreme anti-abortion bill that would have banned abortions after six weeks, but it ultimately failed, according to Rewire. These so-called "heartbeat" bills, Rewire reported, have also been declared unconstitutional by federal courts.

That, of course, hasn't stopped abortions opponents in government from pushing these types of dangerous measures. In October, the House GOP tried to pass H.R. 490, aka, the "Heartbeat Protection Act of 2017," that would've banned abortions if the fetus has a detectable heartbeat — the first so-called heartbeat bill to be introduced into Congress, according to Teen Vogue. The federal legislation, introduced by anti-abortion stalwart Republican Rep. Steve King of Iowa, would've also made it a crime for a doctor or abortion provider to perform the procedure without first determining if there is a fetal heartbeat, without informing the person seeking the abortion of the results, or after they did identify a fetal heartbeat, Rewire reported. H.R. 490, though, went nowhere.

These so-called "heartbeat" bills aren't about "saving unborn babies" — or whatever the line is that the anti-abortion sect uses to defend its position. This is about abolishing a person's right to privacy and bodily autonomy. The end game, as revealed by Iowa Republican Sen. Jake Chapman, is to end the landmark 1973 Supreme Court ruling that secured a person's right to choose. Chapman said, according to The Chicago Tribune, that he would "love" for Supreme Court justices to take up the Iowa anti-abortion measure and have that bill "as a vehicle to overturn Roe v. Wade."

In fact, Republican Sen. Rick Bertrand of Sioux City said "taking another run at Roe v. Wade" is a goal the Iowa GOP isn't "hiding," according to The Gazette.

In the end, though, banning abortions after the six-week gestation mark will not "save" fetuses. As research has shown, abortion restrictions actually lead to more deaths, according to Mother Jones. One study found that states with the most anti-abortion laws have higher maternal and child mortality rates than other regions, Mother Jones reported. That's because restrictive states tend to have poorer health care systems that have less resources and limited access, the research showed. Never mind that the more abortion restrictions that are in place, the more likely people will turn to unsafe abortions, which carry an increased risk of complications that can lead — and have led — to fatality, according to Guttmacher Institute.

So, in an attempt to "protect the unborn," anti-abortion lawmakers are, instead, signing what will ultimately amount to death sentences for parent and baby. If Reynolds signs the bill into law, Iowa would become the most regressive state when it comes to abortion rights — and that would not only be dangerous, it would be deadly.