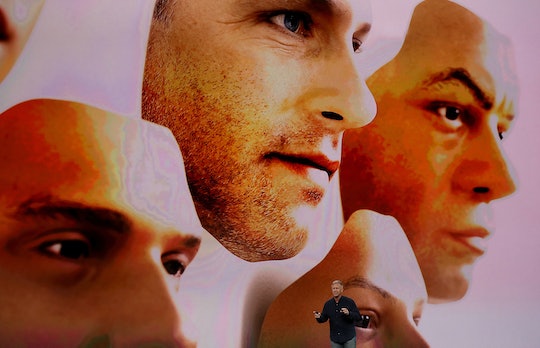 The world has had two full days to process the latest iPhone announcements from Apple, including its revolutionary new Face ID software. When the software debuted at Apple's Special Event on Tuesday, it was met with wide-eyed astonishment in the audience that quickly turned into side-eyed wariness across social media. It shouldn't be surprising that yes, there are already iPhone Face ID conspiracy theories out there — but let's not get too alarmist, shall we? Apple isn't about to become our new Faceless Men overlords or anything — but the technology has definitely raised some privacy concern flags since Face ID was introduced this week.

On the eve of iPhone 8 preorders, the company had to respond to a rather embarrassing flub that took place on the stage at the new Steve Jobs Theater in Cupertino, California, when Apple's Senior Vice President of Software Engineering Craig Federighi tried — and failed — to demo Face ID. When Federighi tried to unlock the phone with his face, he was prompted to use his passcode instead. Apple released a statement about the Face ID demo saying it was a staff error, as the demo phone was handled by too many staff before passing it off to Federighi on stage; the demo iPhone X was basically trying to scan too many faces at once and prompted the lockout.

With such a high-profile glitch — however user-generated — here are some of the theories about Face ID floating out there on the interwebs, which I can totally debunk, by the way.

On Reddit, the r/conspiracy subreddit has already speculated that Apple's Face ID will allow police to unlock your phone just by making suspects look at their phone. Here's the deal: Just like with Touch ID, you can opt out of Face ID. But remember: That's opt out not opt in, so you need to manually turn off the Face ID setting on your iPhone X if you're super worried about the police forcing you to look at your phone to unlock it. So no, Apple is not suddenly stealing your 4th Amendment rights.

Apple Is Building A Database Of Faces

When Federighi showed off how Apple has worked meticulously on its facial recognition algorithm, the world was introduced to Apple's creepy wall of faces, not unlike what Game of Thrones fans saw through most of Arya Stark's Season 5 journey on the show. Again, just like with Touch ID, your biometric data including your fingerprint and face are not sent over to some server at Apple HQ — Apple stores biometric data only on your iPhone and nowhere else, in what's called the Secure Enclave in your phone. So, calm down about where your face scan is located — it's not being emailed out to the Faceless Men.

Someone Else Could Become You

Apple has had a pretty solid record when it comes to protecting user data. That said, iPhones can absolutely be hacked. And if someone were to hack into the data contained in your Secure Enclave, they could theoretically use your biometric data to impersonate you in any system that also uses the same biometric data used by Apple. Does the possibility exist? Of course. Will Face ID usher in a new era of identity body snatchers? Not likely.

As magical as Face ID may appear, facial recognition software has notoriously been racist, albeit unintentionally. Facial recognition algorithms seem to have a hard time with faces from people of color. Apple's senior VP Phil Schiller has assured iPhone users that Face ID won't have the same problems, using a database of more than 1 billion images to train its neural processors in each phone. Engineers have to be careful not to stack their sample database with too many images of white people, otherwise Face ID will run into the same race problems. Basically, it's the same reason why Google Deep Dream A.I. renders so many dog faces, because its sample database had too many pictures of dogs in it.

So, will you need to don your tinfoil hat before you let your new iPhone X scan your face with Face ID? Probably not — but it's clear that Apple's incredibly advanced facial recognition technology has launched us into a whole new era of personal privacy and security concerns.