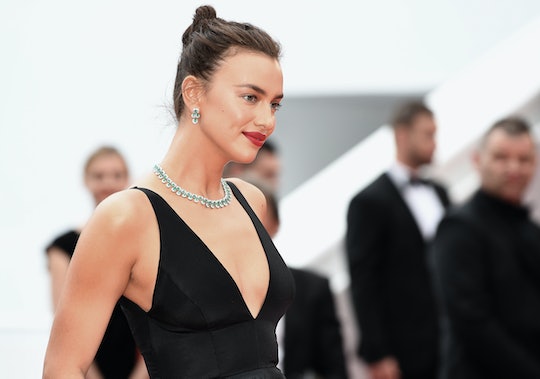 Irina Shayk Wants To Remind Moms It's OK To Be Sexy

There are so many unspoken paradoxes that mothers are expected to live between. You're supposed to be selfless, and yet not self-sacrificing. You're supposed to take care of yourself, and yet not be too attractive. You're supposed to reorient your life around your new family, and yet at the same time, not lose yourself entirely. It's unfair, and most importantly, it's unrealistic, which is why Irina Shayk wants to remind moms that it's OK to be sexy, or to show up to their lives however they please.

Shayk — who has been in a relationship with Bradley Cooper for years, according to Cosmopolitan — has a 2-year-old daughter. She explained in a recent interview with Glamour UK that finding her balance has been a challenge. "In this modern world, in the 21st century, I really believe that if you have a baby, it doesn't mean that you have to wear a longer dress," she told the magazine. "One of my friends said, 'Oh you just posted a sexy picture. You're a mum now!' And I just said, 'So what!'"

She continued in the same Glamour UK interview, "I think it's really about who you are, who you wanna be and I really feel you just have to stick to your thing. I don't believe anyone should have to change just because you're a mother, no! I'm still me!"

Her point is fantastic, and we see this kind of prejudice reflected to us constantly through how we treat celebrities and mass media. We at once all but demand women to fit into a mold of attractiveness — and shame them if they do not — while at the same time policing them for how exactly they choose to show up to their lives. It's pretty wild, and something we need to actively toward toward undoing.

Aside from the pressure to feel attractive in only a certain way, Shayk also told the magazine that part of her self-care routine is keeping a healthy distance from the media. In other words, she doesn't talk about her personal life publicly, and she explains that while it's an OK choice for some, it's how she maintains a semblance of autonomy.

"I have a lot of friends who share a lot of their personal life on Instagram or social media, very publicly," she told Glamour UK. "I admire it and I think it's great — but I think it's all about personal choice. Because my work requires me to be out there, I just decided my personal life will be quiet. That's why it's called personal, because it's something for you and your family and I feel happy with it."

She and partner Cooper are on the same page with this. He also prefers to keep his personal life private, but he sees it more as being "present" with his family, as INSIDER reported. Cooper told NPR last year, "So I guess having a child, and having a family of my own — which is a miracle and something I've always dreamt of — has opened me up even more, I guess, to the day, and to be present."

Though she doesn't give interviews often, Shayk opened up at the end of last year about why it's important to maintain your sense of self after having a baby.

Shayk offers a really important reminder not only for moms, but for anyone who knows a mother (which is, uh, everyone) and anyone planning to become one soon: like anything else in life, your experience is going to be unique, and you shouldn't ever feel the need to conform to anyone else's expectations.