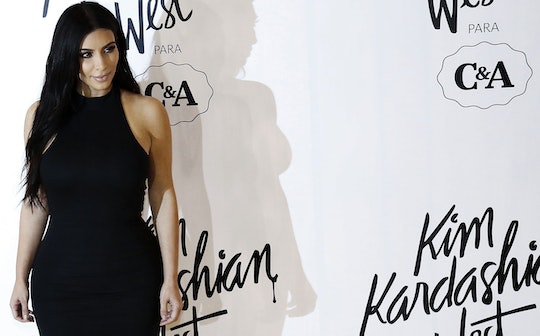 It seems like with each new crop of celebrity babies there’s a series of articles and interviews all asking the women who gave birth to them the same question: “How did you get your body back?” Celebrities are, by definition, the people whose lives we love to watch, and it makes a certain amount of sense that one of the things we love to watch the most is how they create and grow their families. For so many of us, having children is a quintessential human experience, and seeing an actress or a musician as a new mom gives that star a visible human quality: they're more like us in motherhood than perhaps they've ever been, tending to midnight diaper blowouts, learning to latch, and navigating a new life and new routine with a tiny human they hardly know. And it does seem (solely from an outsider's perspective) that celeb moms slim down and lose the baby weight faster than the average birth-giving parent.

Given our fat-phobic culture, and all of the pressure on women in general to be a certain size, it's natural to look for "tips" and "tricks" from those who seem to be doing the impossible. I totally get why we ask women how they got their body back after giving birth, but it’s high time we stopped.

What if that particular new mom has an eating disorder? What if she lost all that weight so quickly because she’s sick? What if for her it’s not a victory?

There are so many things wrong with “how did you get your body back?” question that it’s almost too much to pick apart the awfulness. I don't think it's a good message to tell anyone what to do with their body — whether they've had a baby or not — and I'd certainly never shame anyone into thinking that they had to look a specific way in the days and weeks after bringing new life into the world. If a woman wants to lose the baby weight, that's great. If she doesn't? That's great, too. But the assumption that all women, celebrity or not, should want to "get their body back" after having a baby is not only dangerous, it's vile.

First of all, a person in the limelight is actually still a person, and they deserve to be treated as such. Asking these kinds of questions is not only how we reinforce the unfair pressure put on people who’ve just given birth, it’s also the way that we reinforce and continue to put that pressure on others. When we hold up rapid weight loss as the ideal of new motherhood — by praising those who achieve it and asking them for “tips” — we are directly contributing to those exact ridiculous expectations.

What if that particular new mom has an eating disorder? What if she lost all that weight so quickly because she’s sick? What if for her it’s not a victory? Asking also solidifies the cultural expectation of rapid weight loss, which only adds even more pressure to other famous women who give birth. So it’s bad for not only the new mom who's asked the question, but also other women who find themselves in the public eye.

But it isn’t only celebrity moms who're harmed here when we use such language. We may be holding famous moms up to a higher standard than we are the average new mom, but it’s not like the two things aren’t related. When interviews and articles surrounding the births of children to high-profile parents always, always, ask this one stupid question, it communicates something very clear to the moms who are reading and watching: Your post-baby body is a thing to get rid of. It's a shame, and it's undesirable, and people are paying attention to when you get your pre-baby body back.

Of course, as we all know, despite moralizing about food and exercise all over our culture, famous women do not lose weight quickly because they have superior gumption over those of us who’ve never starred in a feature film. No, they lose weight more quickly because it’s a requirement that they do so and they have access to more tools to help them. When you ask an actress how she “got her body back” after a baby, she’s probably going to mention her personal trainer. Of course most new moms do not have personal trainers, nor are they about to get one. The fact that we expect modern women who don't have access to costly services and exercises to make the same changes at the same speed is ridiculous.

You can’t get something back that you haven’t lost, and women’s bodies do not magically disappear during pregnancy.

But honestly, you know all of this already. Of course Hollywood beauty ideals are stupidly unrealistic, and of course that’s monstrously unfair to everyone. It’s old news. So let’s get to the point, let’s get to the biggest, most important reason why we should drop this terrible question once and for all. Ready?

Their bodies were never missing.

You can’t get something back that you haven’t lost, and women’s bodies do not magically disappear during pregnancy. Do bodies change during pregnancy? You bet they do; they change a hell of a lot. But they don’t stop existing, and they don’t stop belonging to whomever they belong to. If you had a body, you got pregnant, and then you gave birth, you actually still have the same body! The same thing goes for Kim Kardashian.

What bodies do actually do though, is change. Bodies change constantly. They change throughout pregnancy and childbirth, they change when you age, they change due to activity levels and illness and injury. I think that's wonderful. I think we need to learn to just let that be wonderful. Telling anyone that they should expect to get their body “back” to the way it was in the past is not only hurtful and unfair, it’s also ridiculous and nonsensical. That’s not how life works, that’s not how time works, that’s not how bodies work. Even if sometimes enough time with a personal trainer can make it seem like it does.

So please, let’s stop it already. Maybe instead of asking these new moms how they “got their body back” we can ask them some real questions that actually make sense and don’t reinforce ridiculous ideals. I suggest we start with “are you getting all the support you need?” I bet that’s one question that all new moms — famous or not — could benefit from.