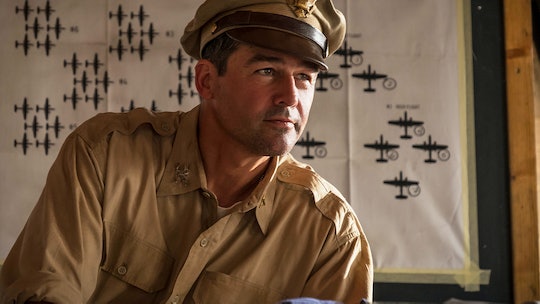 They say clear eyes, full hearts, can't lose. But I've got to admit, this new adaptation of Friday Night Lights seems a little out there for my taste. Kidding! I'm totally kidding. However, on May 17, FNL alum, Kyle Chandler, star alongside George Clooney, Hugh Laurie, and Christopher Abbott in Catch-22, a new mini-series based on the Joseph Heller novel by the same name. With such a star-studded cast fans are bound to dig into every detail, including the meaning behind the show's title. So is Catch-22 a real thing? As it turns out, the phrase was coined by Heller himself.

Although Catch-22 is a work of fiction based on a satirical novel, the Catch-22 rule is real. Per Merriam-Webster's Dictionary, a Catch-22 is a paradoxical situation in which "the only solution is denied by a circumstance inherent in the problem or by a rule." If you find yourself in a Catch-22, you're trapped between two conditions that contradict one another. For example, everyone knows that in order to land an entry-level job, you need experience. But, in order to get experience, you need a job. And there you have it — a Catch-22.

As I mentioned before, Catch-22 comes from the 1961 novel written by Heller. The story follows Captain John Yossarian, an Air Force flier in Italy during the final months of World War II. Yossarian, who is angry with his day-to-day life, looks for a way to stop flying. That is, until he discovers that pilots can be removed from duty if they are insane.

In Chapter 5 of the novel, the Catch-22 term is formally introduced to readers by Doc Daneeka, an army psychiatrist. Doc Daneeka spoke to Yossarian and used the phrase to explain that "anyone who wants to get out of combat duty isn't really crazy." So Yossarian concludes that any pilot who requests a mental evaluation for insanity cannot be insane, as the request itself shows the pilot's sanity and desire to continue living. Tricky.

Despite arguments claiming that Heller's novel is unadaptable, from the looks of the Catch-22 trailer, the Hulu 6-episode mini-series will bring Heller's story to life — moral complexities and all. Speaking with The Hastings Tribune, Clooney explained that scriptwriters Luke Davies and David Michod are the two individuals responsible.

“I think David and Luke did an amazing job with sort of unspooling these characters because, when you do a movie, you don’t have enough time to really get to know the characters," Clooney said. “And that’s why you do this as a television show, is you get to spend time with the characters like the book does. And they just figured out a way to interpret it in a way that we didn’t think was really possible. So I think that’s why we got onboard, for the most part.”

To put it short, yes. The phrase Catch-22 is real. Essentially, it's a no-win situation — regardless of what path you take, you're screwed. Let's just hope that with the help of Davies and Michod, the Hulu series doesn't get caught up in a Catch-22 of their own.