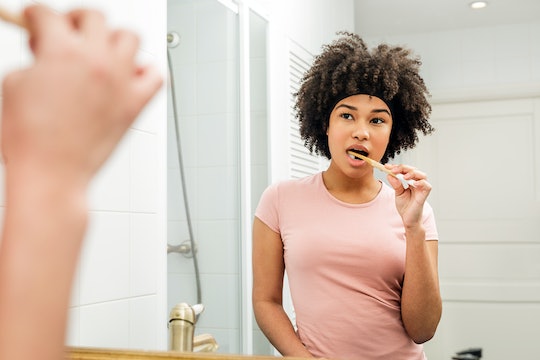 Here's How The Timing Of Ovulation Affects Your Period, According To Experts

Whether you’re trying to get pregnant or just wondering why your cycle is off, it may help to ask some questions about your ovulation. Is a late period caused by late ovulation, and what causes late ovulation, anyway? Is it even something to be concerned about? Ovulation and periods are always linked, and later women may experience some difficulty getting pregnant.

Felice Gersh, MD, is an award-winning OB-GYN and founder/director of the Integrative Medical Group of Irvine, in Irvine, California, and author of PCOS SOS: A Gynecologist's Lifeline To Naturally Restore Your Rhythms, Hormones and Happiness. She tells Romper in an interview that late periods are always due to late ovulation, or to no ovulation at all. “Late ovulation can be due to a variety of causes: sleep deficiency, nutritional deficiencies, eating disorders, high stress, obesity, chronic infections, thyroid imbalances, autoimmune diseases, and other medical conditions,” she says. “The menstrual cycle is a very complex human function and anything interfering with the proper sequence of signaling agents and hormones can interfere with ovulatory mechanisms.”

Physicians can perform tests to determine why you may be ovulating late. Tiffany Wells, MD, OB-GYN at River City OB-GYN and Baptist Health in Jacksonville, Florida, tells Romper in an interview that one of the most common reasons is PCOS. “If you’re not having a monthly cycle but you’re still having cycles, that would indicate that you’re ovulating late,” Wells says. “Women with PCOS don’t tend to ovulate monthly or even every other month, and then when they do ovulate and have their period finally, it tends to be really heavy. They tend to have higher rates of infertility because of not ovulating as often,” she explains.

The main concern most women have about late ovulation is that it can affect their chances of getting pregnant. Women who are ovulating later than normal due to stress or a medical condition may be delayed.

“Ovulatory dysfunctions will impair the ability to become pregnant,” says Gersh. “The underlying cause of the delayed ovulation needs to be determined to truly heal the woman impacted. Short of that, fertility treatments can be used to override the issues causing the ovulation abnormalities, without actually addressing the true causes of the fertility problems. Fertility drugs can enable successful conceptions, even with underlying medical issues still present.”

While the word infertility sounds intimidating, “late” ovulation simply means a woman releases an egg later than most women do (12 to 14 days into the menstrual cycle). Wells says if you’re later than the average ovulation range every month, that’s probably just your normal. Using an over-the-counter ovulation prediction kit a few months back-to-back can more clearly define your most fertile dates.

“If your cycles are changing from what they’ve been, it is something to address with your physician,” says Wells. “Not every woman knows when she ovulates, but doing an ovulation prediction kit can help. It detects a hormone surge directly preceding your ovulation, and it’s something you can do prior to going to the doctor if you want to have a little more information. If I learn what my true fertile days are, then I’m more likely to be successful. Using them every month helps you really for sure narrow down when you should be trying.”

If your period becomes unpredictable for a few months in a row — or stops coming at all — that’s a good sign to make an appointment with your OB-GYN.

“Certainly, if you’re to the point where you’re skipping months or multiple months, check in with your doctor,” says Wells. “Over time that can put you at risk for endometrial cancer. We want to treat that appropriately whether you’re trying to get pregnant or not, so it’s not just about fertility, but also about cancer prevention.”