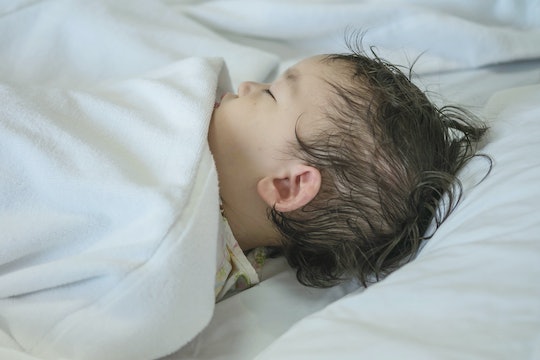 Imagine watching your child wake up one day and they suddenly can't move their arms well, or one of their eyes is drooping. Imagine they tell you that they feel weak or tired, and you have no idea what's happening. You'd be terrified. This has been the case for 62 families in recent months. Seemingly healthy kids are coming down with severe muscle weakness and even paralysis in a wave of cases of a polio-like illness. Known as Acute Flaccid Myelitis, or AFM, the disease has seen an uptick in diagnoses recently, but is Acute Flaccid Myelitis contagious?

The disease itself is a swelling of the spinal cord, which can lead to muscle weakness, paralysis, and even death, although no deaths have been recorded this year, as per the Centers for Disease Control and Prevention (CDC). AFM in and of itself does not appear to be contagious, noted the CDC, however, some of the potential underlying conditions that cause the disease may be. The frustrating thing about AFM is that it's such a mystery. Scientists just don't know what causes it or why it's occurring more frequently, and they don't yet understand how to best treat the disease. As of now, they can only manage the symptoms. There is currently no cure for AFM.

Dr. Nancy Messonnier, director of the CDC's National Center for Immunization and Respiratory Diseases, said in a press briefing on Tuesday that AFM is a very rare condition. Sure, 62 cases sounds like a lot (especially given that AFM is primarily a pediatric condition), but considering there are almost 75 million children in the U.S. at any given time, that's still a less-than a one-in-a-million diagnosis. Messonnier also noted that it's somewhat seasonal, though this year they're seeing more: "Based on previous years, most AFM cases occur in the late summer and fall. The data we are reporting today is a substantially larger number than in previous months this year. The CDC recently received increased reports for patients suspected to have AFM with an onset of symptoms in August and September."

Messonnier told reporters that she understands how difficult this all is. "We know this can be frightening for parents," she said. "I know many parents want to know what the signs and symptoms are that they should be looking for in their child. I encourage parents to seek medical care right away if you or your child develop sudden weakness or loss of muscle tone in the arms or legs." As to the question of whether or not Acute Flaccid Myelitis is contagious, it's a tricky question with an involved answer.

I reached out to Dr. Emily Chapman, Chief Medical Officer and Vice President of Medical Affairs at Children's Minnesota to find out why.

"We know that AFM can be associated with viruses, and that viral infections are contagious," Dr. Chapman tells Romper. "The complication of limb weakness, however, is not itself contagious. Children in one household may all share the same virus, but only a very rare case is associated with AFM."

AFM is a form of transverse myelitis, and according to the National Multiple Sclerosis Society, there is no evidence that it is contagious. However, AFM is thought to be a secondary condition to other potential causes or diseases that may be contagious. Dr. Chapman notes that "AFM is a symptom that can have a number of possible causes. The recent cases are likely associated with routine viral infections, most commonly those belonging to a family of viruses called Enteroviruses." Some enteroviruses include hand, foot, and mouth disease, as well as conjunctivitis (also known as "pink eye"). "Typically, these viruses cause simple coughs and colds, or minor intestinal symptoms," Dr. Chapman says, adding, "In rare cases, these viruses also cause changes in the spinal cord that lead to weakness in one or more limbs."

Please remember that AFM, while on the rise, is still supremely rare. It's like saying "A fascination with red balloons may cause killer clown syndrome (only real for Stephen King fans) but not all people who carry a red balloon each year are going to end up hanging out in the sewer with a severe case of pointy teeth."

Other possible causes listed by the CDC include environmental toxins and the West Nile Virus, if you needed more cause to hate mosquitos with the fire of a thousand suns. If you notice any of the following, go see your doctor immediately: "facial drooping or weakness," "difficulty moving the eyes," "drooping eyelids," or "difficulty with swallowing or slurred speech." Otherwise, try not to let the news freak you out. It really is rare.