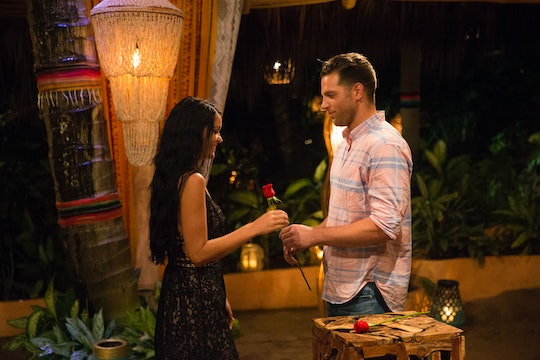 Adam May Have Found Love In 'Paradise'

This has been such a strange season of Bachelor In Paradise, maybe because the filming has been so condensed that not every couple is getting the usual amount of airtime. Like, with all the drama with Dean's love triangle and scallop finger jokes, it's hard to even remember that Raven and Adam are sort of coupled up. Or gauge how serious they are about each other, since they keep swapping roses but fans never really get to see them interacting all that much. So are they dating now or is Adam single after Bachelor In Paradise?

According to Us Weekly, sources have reported seeing Raven Gates and Adam Gottschalk together in Los Angeles post-filming, which means that they might be dating still. The source added that the two have been on romantic weekend getaways together (um, what's more romantic than the Paradise set?) and that Raven's parents met Adam recently. There are also reportedly plans in the works for Raven to go to Dallas to meet Adam's family as well.

So it sounds like Adam is definitely off the market for now, though Bachelor Nation will find out for sure during the finale this week. If anything, he and Raven definitely have a little something going on, seeing as he made a definite choice between his two flings — Raven and Sarah — early on, unlike some of the other men on the beach. (You know who you are.)

Both Adam and Raven are super active on social media, but they don't necessarily post about each other unless it's in relation to filming, so it's difficult to tell if it's the real deal or they're just being coy about their alliance on the show. He's posted pics of them hanging out together and, earlier in the season, Raven even posted a shot of her cuddling up to Adam's weird doll. Seriously, if a woman can get down with your creepy puppet, it must be true love, because that could be a huge deal breaker for some people. (Just saying.) Even Raven couldn't believe it, commenting on an Instagram post that she never thought she'd be fighting for a "grown ass man that has a doll."

If Adam and Raven are still having fun together, then good for them! Both of them came into this thing seemingly "for the right reasons." Raven told The Hollywood Reporter this spring that she "trusted" the Bachelor Nation-matchmaking model and was confident that this was going to be her summer. "I want to find someone that is the Evan to my Carly. That’s the kind of relationship that I want. I want to find an Evan and Carly type of love"

If she means totally improbably, goofy, and super sweet, she might have found it in Adam. Only time will tell.