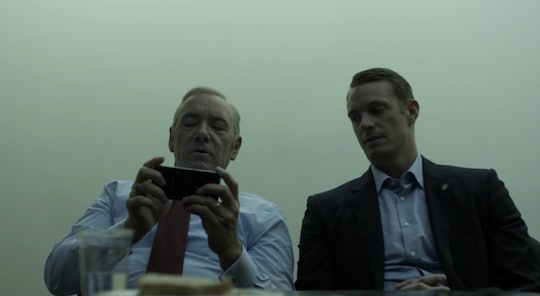 President Frank Underwood is a gamer. Not just with his own personal House of Cards either. The dude can't seem to get enough of video games. Whether he's playing Call of Duty in Season 1 to unleash a little of his venom, or saving a princess in the (what looks to be) boring independent puzzle game Monument Valley, Frank needs his game time. On Season 4 of House of Cards, Frank & Will Conway play Agar.iO, which is very real and you can play it, too.

In the midst of a very heated campaign, Frank and Conway take a moment to unwind a bit. They do so by playing Agar.iO, a game Conway is a fan of. According to the Agar.iO website, the wildly popular multiplayer game is action packed. Players control a cell in a map that is meant to represent a petri dish; your goal is to gobble up as many of the smaller cells as you can and gain the biggest mass without being swallowed by a larger cell. The game was created by Matheus Valadares and has reached 2 billion views on YouTube. It's being called 'Darwinian' and is brilliant in its simplicity. It even has an app now where you can add 'skins' to your cells... heck, you can even become Donald Trump in the game if you want.

So what's the significance of pretty boy Conway and ruthless Underwood playing Agar.iO? There is always the whiff of significance in Frank's dealings, so there has to be one, right? Remember that the game Monument Valley brought him to Tom Yates, who reviewed the game originally.

This time around it's Conway showing the President the game Agar.iO on his phone. The two were meant to be meeting to discuss the ICO issue (an Islamic terrorist group) but that's not what this meeting was really about. It's a pissing contest, a chance for each one to get the measure of the other. Frank has already expressed a begrudging respect for the way Conway manipulates his running mate, the recently retired Army General, into calling the President out to the media for his ineffectual response to the ICO threat. "I wonder if this is his idea because it almost seems like something I would do."

And of course, Frank calls his bluff. The President invites him to discuss the ICO crisis, but instead they play Agar.iO on Conway's phone. It works out well for all of us because we get this tender moment between these two men who have stripped off a layer (in Underwood's case, his shoes) to be who they really are together. Just two dudes playing a game — Conway watching over Frank's shoulder as he tries not to get eaten. A metaphor, most definitely.