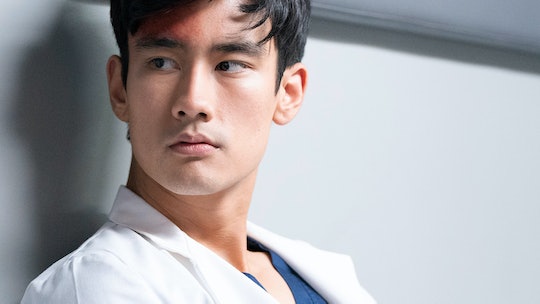 Will Alex Landi Leave 'Grey's Anatomy'? You Should Be Scared For Nick & Levi

Grey's Anatomy Season 15 has had its ups and downs, but Nico Kim (Alex Landi) and Levi Schmitt (Jake Borelli) have been its shining light. The first openly gay male surgeons on the Shondaland hit series stole the hearts of fans early in the season. However, as Grey's Anatomy nears its season finale on May 16, Nico and Levi's relationship isn't exactly where fans had hoped it would be. Recently, the actor who plays Levi was promoted to a series regular for Season 16, while the status of his onscreen counterpart remained untouched. But is Alex Landi leaving Grey's Anatomy? There's reason to worry for your new favorite ship — and it's not just because of all the contract changes.

On May 10, ABC renewed Grey's Anatomy for another two seasons — as in, we're getting at least 17 seasons, y'all. But for now, it's difficult to determine whether or not Landi will return next season. Per TVLine, ABC added three actors as series regulars in the Grey's Anatomy cast — Borelli, Chris Carmack, who plays Atticus Lincoln (aka Link), and Greg Germann, who plays Tom Koracick. While Landi is missing from this list, it could have something to do with the actor's new recurring role on Netflix's Insatiable. However, this doesn't necessarily mean the actor will say goodbye to Grey's just yet.

When the news of the actor's new role on Insatiable Season 2 broke out online, Landi shared his excitement on his Instagram page. He took a screenshot of the original Deadline article and wrote, "Excited to announce it. Already filming in Atlanta right now. Amazing group of people. Thank you to everyone."

Did you catch that? In the post, Landi revealed that he was filming Insatiable in April. Since Grey's begins production in the late summer months, it's likely that the filming schedules won't conflict and Landi will get to hold onto both recurring roles.

That being said, details in regards to Nico are still under wraps until the Grey's Anatomy finale airs on Thursday night. And yes, you should be scared. The Shondaland drama has been slowly building up Nico and Levi's arc throughout Season 15 and there's plenty of tension rising between the two for the finale. Following a mistake in the operating room, Nico killed a patient. Since then, the orthopedic fellow has been unraveling and he was even shown applying for a new job.

According to the finale's synopsis courtesy of ABC, the episode titled "Jump into the Fog" will have Levi talking "some sense into a struggling Nico." But will Nico leave Grey Sloan for another hospital? Will Levi and Nico break up? Borelli recently opened up to Cinema Blend about the couple in the finale. And no, it will not make you feel better.

When the publication asked if fans should read into the parallels between Landi's new role on Insatiable and Nico's potential new job on Grey's, Borelli responded:

I don't know how much you can read into Shondaland shows, things get shaken up every second. Very drama-filled. So I would just stay along for the ride. But yeah, right now we're in one of the biggest fights of our relationship. It doesn't seem as if Nico is understanding that Levi is trying to get an apology or trying to mend this rift that they have, and I also don't think that Levi understands that Nico needs more faith than what Levi is giving him. So I'm very curious to see if they can push through this. We haven't seen them have such a big disagreement before. Their relationship is new, and sometimes relationships like that don't survive. So I'm excited to see how this ends on Thursday.

Seriously? Seriously. While I hope that Landi doesn't leave the ABC series behind, after 15 seasons of Grey's Anatomy, I know the drill. Whatever happens in the Grey's finale, happens. But that doesn't mean that I have to be happy about it.