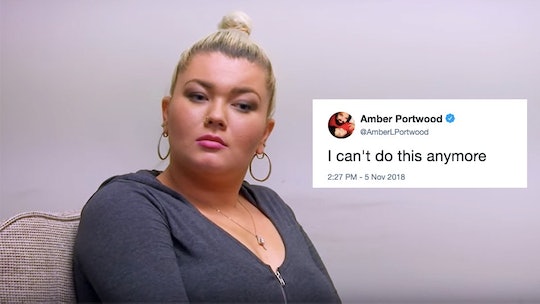 It's hard to imagine what it's like having your entire personal life on display for the entire world to see. Whether by choice or not, that kind of exposure can wear on a person. After enduring what sounds like a lifetime worth of heartache, Amber Portwood may be quitting Teen Mom OG. On Monday, she tweeted about her desire to leave the show, leaving many fans with questions about her future on the reality show. Romper's request for comment from MTV was not immediately returned.

Portwood took to Twitter to express her frustration and disheartenment on Monday shortly before the show aired. "I can't do this anymore," she wrote. "I have to quit this show." When her followers expressed their shock over her message, she responded with a lengthy explanation.

"The heartache this show has put me through is too much to bear anymore. If I will not be shown then there's nothing more to do," she wrote in a tweet. "My name will not get smeared anymore. I hope everyone is resting easy with the money they earned off of heartache and pain that I've endured."

Portwood is completely entitled to her feelings and desire to leave the public eye and honestly, it's hard to blame her. In the years since she first appeared on Teen Mom, Portwood has experienced more than her fair share of pain and struggles.

Her emotional tweets came shortly before Monday's episode aired, during which she opened up about a miscarriage that she had suffered in the past, while engaged to former fiancé Matt Baier, according to Ok!. She told Kristina Anderson, who is currently married to Portwood's ex Gary Shirley, about the painful experience. It is unclear whether this experience influenced her desire to leave TV.

Beyond this loss, Portwood has been repeatedly shamed for her parenting decisions. In December 2017, for instance, she was accused of being a "bad mom" for taking some time away from her daughter Leah after going through a breakup. In response to the trolls, at the time, Portwood tweeted:

I'm sick and tired of these comments about my daughter! Leah is my world and SHE knows it. That's what matters! People go through horrible times when they split and I'm no exception! I was depressed and horribly sad so I did the best thing and made sure my daughter was protected!

She went on to explain that she doesn't have to justify her decisions to complete strangers. But when she announced a few months later that she was pregnant, the haters came after her yet again. In February, Portwood made an attempt at sharing her joy with her fans via a pregnancy update, as Us Weekly reported. "Heading to my doctor for a check up! Can't wait to share my little bundle of joy with you all," she captioned a photo of her growing tummy. "Sending love always." But rather than join in on the excitement, many of her followers decide to drag her.

One of her followers wrote, "I hope this baby snaps you back to reality and that you are a good mom to both it AND Leah-you have a lot of making up to do." Yet another said, "I wonder if she’ll abandon this baby like she did Leah." Yikes.

And just last month Portwood decided to take her young daughter Leah on a parasailing adventure and tweeted about it. Not everyone was so keen on the idea though. "Amber is going for the fancy life. Kids don’t care... they just want time. It was about show, not Leah," one person tweeted. Portwood responded to the accusations, and I can only imagine that it is getting old.

But even if Portwood does decide to ultimately leave the show as she stated on Twitter, her fans don't have to worry about not seeing anything from her. Aside from reality TV, she is also a published author, social media influencer, and business woman. As she explained in a later tweet, as reported by In Touch Weekly, she has options. "No there's other things that I will do and it will be to help people like I've always only wanted to do!"

It is ultimately up to Portwood what is the best decision for her and her family. In the meantime, hopefully her critics will keep their thoughts to themselves.