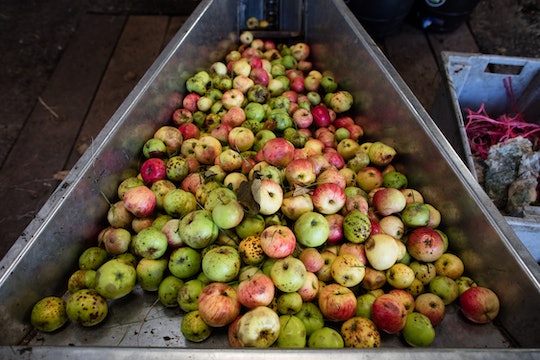 If You're Breastfeeding During Apple Cider Season, Read This Before You Sip

It seems like every day there's a new study telling you what you can and cannot eat and drink while you're breastfeeding. One day you're told you should drink a pint of Guinness each night to spur on your supply, and the very next day you're told that any alcohol at all can diminish your production. It's hard to know what's real and what's hogwash. This especially seems to be the case for seasonal favorites like apple cider that get more popular during certain times of year. So is apple cider safe for breastfeeding, or is it like energy drinks and that eighteenth cup of coffee (best avoided when you're nursing)?

The thing about apple cider is that it comes in so many forms. You have your gold standard: cold, plain cider in the refrigerator section of the grocery store. Then there's hard cider like that from Angry Orchard or Strongbow. And there's a third option you're probably not as familiar with if you don't live near a farmer's market or out in the country, and that's unpasteurized cider. It's essentially just like the regular cold stuff, but it hasn't been superheated to destroy any possible pathogens extant in the juice. Both the pasteurized and the hard cider are fine while you're breastfeeding, certified lactation consultant Leigh Anne O'Connor, IBCLC, tells Romper. Just drink it in moderation, like anything else. The unpasteurized cider, on the other hand, is probably best avoided, noted Healthlink BC.

I need to confess something that may result in me getting my basic mom card revoked permanently. Here goes: I like apple cider more than pumpkin spice lattes. I know, it's probably shameful, but it's true. There is simply something about the crisp-tart beverage that makes my mouth sing. I know I'm not alone, and that plenty of women adore the fermented juice. But being that it's fermented and processed, you may still wonder if apple cider is safe for breastfeeding. Or wait, what if it's good for breastfeeding?

Again, as far as its safety, O'Connor confirmed that both pasteurized cider and hard cider are okay in moderate amounts. A good rule of thumb is to follow the same rules you would for breastfeeding as you would for driving. Don't drink more than a drink an hour, and always have water with it. There's no way to "pump and dump;" it just has to make its way out of your system. However, if you're prone to problems with energy and sugar, O'Connor says that even the safest pasteurized cider from the fridge at Whole Foods, lovingly picked by only the crunchiest hipsters, should be consumed sparingly. She says it's really high in sugar, and not the best choice of beverage.

I contacted registered dietitian Summer Yule about whether or not cider could actually be good for breastfeeding. Indeed, there are some benefits to cider, Yule tells Romper, but they're pretty minimal. "Pasteurized apple cider has a nutritional advantage over pasteurized apple juice in that the cider contains fiber," she says. "Fiber can play a role in improving digestion and blood cholesterol levels." Which is great, and if you're fresh out of the hospital after having your baby, you need all the help you can get with the pooping, because holy wow can that ever hurt.

As for the unpasteurized cider, Yule is not an alarmist by any means, but cautions that it can contain e-coli. Which, while it might not be transmissible via breast milk, is definitely no fun for mom, so talk to your doctor.

In the end, have some spiced cider on a cool night. Enjoy yourself, just do it in moderation.