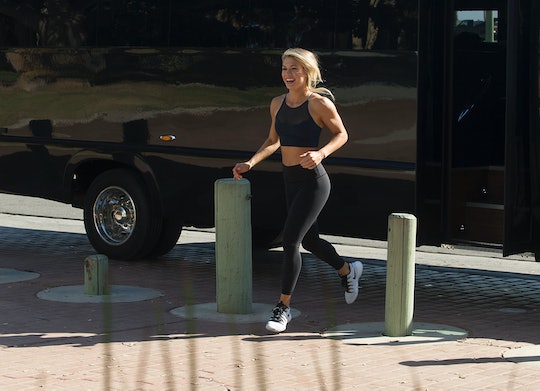 It's pretty rare for a Bachelor or Bachelorette to get visibly upset with a contestant, but leave it to Krystal, the California-based fitness coach and one of this season's most grating competitors to get a rise out of the usually good-natured Arie. So is Arie mad at Krystal on The Bachelor? She threw an obnoxious tantrum during Week 5 which certainly didn't do her any favors.

Week 5's group date involved a bowling tournament in Fort Lauderdale, FL, and if that doesn't perfectly encapsulate the lackluster charm of this season, I don't know what could. The women were split into two teams to compete for a cocktail party with Arie, while the losing team would have to go back to the hotel. Once Krystal's team won, however, Arie decided it was unkind of him, at this point in the competition, to disinvite people from the cocktail party that traditionally goes with group dates. Instead, he took it upon himself to make extra time that night and invite the whole group out for drinks. Krystal decided this was the most deceitful and disrespectful trick in the world, and apparently suffered a meltdown in the bus on the way back to the hotel. (Cameras weren't present, so we only heard about it secondhand from the other women who were on the bus with her.)

Krystal decided that since Arie had committed the sin of going back on his word (he promised that the losing team would be sent to their rooms!), she would be staying in the penthouse suite in her robe during the cocktail party, thank you very much. Oh, and she also packed her bags to leave. It was sort of like when Corinne skipped a rose ceremony to nap on Nick Viall's season of The Bachelor, but way less empowered. Krystal cited a refusal to go down to the party based on the fact that she had been lied to and disrespected (and, according to the others, she had been calling Arie a liar on the bus).

When Arie heard about this, he left the cocktail party to pay Krystal a visit in her room, taking time away from the other women to tend to Krystal. They had an intense conversation in which Arie patiently explained that he was extending the evening to make more time for everyone — not taking time away from the winning bowling team. (He also seemed perplexed that anyone got this upset over a bowling tournament, which, fair.)

He communicated that he wasn't happy with Krystal's stunt, which forced him to take time away from his group date, and then he left her alone. Just as Arie got back into the swing of the cocktail party, Krystal traipsed in and sat down amongst the women waiting to speak with him. Bekah seized the opportunity to challenge Krystal's logic, pointing out that she changed her mind after making a decision just like Arie did and went back on her "word" to skip the party. Frustrated (and losing the argument badly), Krystal went back to her room without seeing Arie.

She apparently spent the entire day of Tia's one-on-one date "hiding in her room," according to Bekah, but Krystal later clarified her position. "Yesterday, I wasn't hiding in my room, I was investing in myself and growing from the struggle that happened and the challenge," she said. "Like, I was discovering. And I realized I'm invested in my relationship with Arie."

The night of the rose ceremony, several women took Krystal aside to try and talk to her, including Bekah, who asked point blank why she was still there. Arie pointed out that he and Krystal were already much further along in their relationship than he was with the other women, because she had already been to his hometown and met his family. He emphasized that it wasn't totally rational for her to be threatened by the other women receiving more time with him, and he definitely seemed to be questioning Krystal's stamina given the nature of the show. In the end, Krystal got a rose, so he seems to be cautiously moving forward with their relationship — for now.