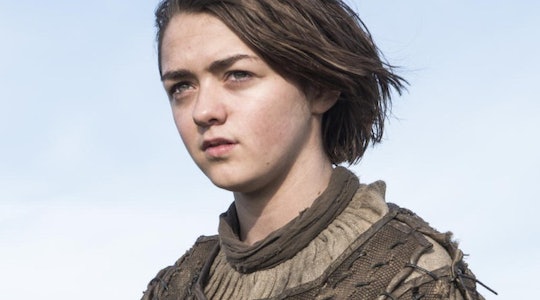 Is Arya Heading To Winterfell On 'Game Of Thrones'? It's Time For A Girl To Go Home

Getting to see Arya in the Season 6 finale of Game of Thrones was a surprise, since we hadn't really expected to see her again until she made it safely to her home in the North. But after her quick pit stop in the Riverlands, you might be wondering if Arya is heading to Winterfell on Game of Thrones? She did tell Jaqen H'ghar that she was going home, which of course meant over the sea to Westeros and Winterfell, and now that she was able to kill Walder Frey (and his sons), that should be her next stop. There are supposed to be just two seasons left of Game of Thrones, so it's time all of the players got to where they're supposed to be. In the past six seasons, Arya has been pretty much everywhere else in Westeros, then in Essos for far too long, so it's time.

When she walked into the Frey dining room, wearing the face of someone else and calling Walder Frey "My Lord" instead of the "M'Lord" which a low born girl would have done, most of even the most hardcore Game of Thrones fans still didn't realize what was going on. But so much emphasis was put on his food and wondering where his sons were that it all started to make sense. The best part was probably when Arya killed Walder Frey in much of the same way her mother was killed at the Red Wedding. Instead of saying, "The Lannisters send their regards", though, she told Frey, "My name is Arya Stark, I want you to know that. The last thing you're going to see is a Stark smiling down at you as you die", and slit his throat just as Catelyn's was seasons ago.

Of course we want and need Arya in Winterfell, to be with what remains of her family, and help in ruling and protecting the North, but her way of concluding any story lines with the Freys or Riverrun was the perfect kind of closure. You had to worry for a minute about whether or not Arya's stance on becoming a Faceless Man had changed, since she apparently swiped a face before she left the House of Black and White, but when she says who she is, it's clear that she still does not want to be "No One" and that her next destination is home to Winterfell.

Since we still have to see Arya making her way home, up through Riverrun and The Twins, passing by The Vale, it is entirely possible that she comes across her old friend The Hound, who is pretty much a misplaced person at this point. But, they didn't reintroduce him this season on Game of Thrones for nothing. And if the next big battle is about to be the Starks protecting Winterfell against White Walkers or even the new Queen Cersei, it would be kind of awesome to have The Hound on your side. It would also make it that much more possible to usher in Cleganebowl, so we can still get hype over that.

It's hard to say how long it will take Arya to finally get to Winterfell when Season 7 begins, but we only have so much time left and we deserve the Stark reunion we've been hoping for since Season 1. A girl is Arya Stark, though, and she said it herself that she's going home.