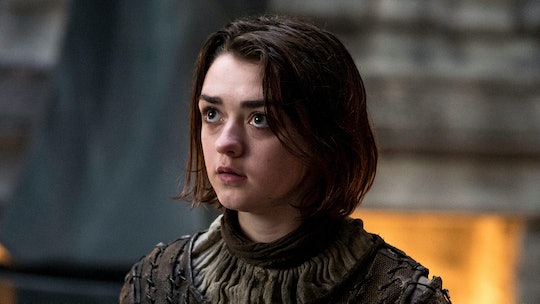 Is Arya Stark Going To Become A Faceless Man On 'Game Of Thrones'? It Could Happen

The last time we saw Arya Stark, she was still in Braavos with Jaqen H'ghar, that Faceless Man with the flowing locks and penchant for speaking in riddles. Arya was also very much blind after having went against the rules of the House of Black and White. So is Arya going to become a Faceless Man on Game of Thrones now? The good news, of course, was that she did not meet a similar fate of almost every other member of the Stark family and die in the Season 5 finale of Game of Thrones, but seeing her eyes become all milky white just makes her story that much more uncertain.

With the Season 6 premiere of Game of Thrones upon us, we've all got to be wondering what Arya is going to do to get herself out of her current situation of being blind and still pining after that revenge. Doesn't she have, like, three more people on her mental hit list? Is she going to try and regain her sight and get out of Braavos, since things are kind of more intense that she probably imagined they'd be? Or will she stick it out, lose that scary looking blindness, and finally become a Faceless Man?

In the Season 6 trailer for Game of Thrones, we see Arya getting slapped by someone, followed by a show of her mentor allowing her to stay in the House of Black and White, so at least she still has his support. I don't know if she will become a total, full-fledged Faceless Man (or, Woman?), but there isn't anywhere else for her to be right now. The North is still being inhabited by the Boltons, King's Landing is all kinds of messy, The Hound is still MIA (who she left for dead anyway, so that relationship is probably squashed), and her only siblings left have their own problems to take care of.

Already, Arya has broken the cardinal rule of the Faceless Men, and that is to not kill someone whose name you know. And as we all know, the whole point of Arya becoming a Faceless Man, for her anyway, is to learn how best to get revenge on those who have pretty much ruined her family. So already, she can't totally commit to being part of their culture. But being blind really puts you at a stand still, and she will no doubt at least stay among the Faceless Men for the first few episodes of Season 6 of Game of Thrones, but will Arya become a Faceless Man completely? She might be too much of a wild card and a little too hardcore for that.