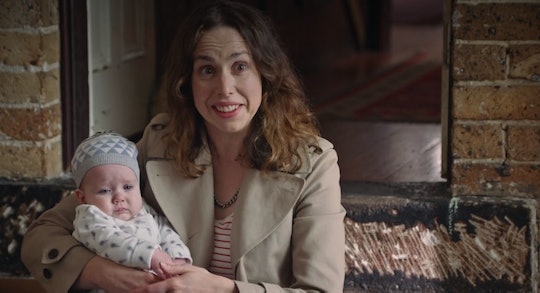 There's A Reason Why Audrey Is So Relatable On 'The Letdown'

If you ever want to feel like you're not the only one who faces judgmental comments from other moms, then I highly suggest watching The Letdown on Netflix. The Australian comedy about motherhood and all of the struggles and lessons that come from it are painfully authentic, including the life of Audrey, the main character. But since the show is so relatable and realistic, fans are probably going to be wondering, is Audrey from The Letdown a real person? The character seems like she could be based on a real person, given how common her struggles as a new mom seem to be, from being judged for breastfeeding and drinking caffeine to dealing with a partner who assumes the brunt of the responsibility should be on her shoulders. The show is all too real and familiar for a lot of new parents out there.

Alison Bell, co-creator of The Letdown and one of the writers, plays the lead role in the series, which was recently brought to Netflix in the hopes of being picked up for more seasons. She spoke to The Sydney Herald in 2016 about the inspiration for The Letdown and how co-creator Sarah Scheller came to her with the idea. The pair looked to everyone around them for inspiration. So while Audrey isn't a real person, she was created for The Letdown with other real life moms in mind.

"Sarah [Scheller] had the idea after going to her first mothers' group – and her oldest is eight now! – and I said, 'you're a genius, let's do that'," Bell told The Sydney Herald. From there, they continued to look at the mothers around them and think about everything they were going through with new babies and decided to create characters based on the challenges rather than the happier moments of motherhood. "I don't want to deny the joys [of motherhood] – and the joys are glorious – but the challenges are real and profound," Bell added.

Even though at the time, Bell hadn’t yet become a mom herself, she saw the people around her going through it for the first time and watched and learned from them the very real struggles that parenthood brings. Because let’s face it — it’s probably one of the biggest adjustments in a person's life that they can make. With The Letdown, Bell and Scheller’s purpose is to take these realistic experiences and create something funny from them, while also not diminishing how hard motherhood is for many.

When you think about what the women on The Letdown, namely Audrey, go through as new moms, especially without many mom friends at first, it's understandable to wonder if she's more than just a work of fiction. But the truth is, Audrey's story is basically based on any new mom we’ve all known (or been) at some point. She's attempting to juggle going back to her old life while also caring for this tiny human who depends on her for everything.

Even though Audrey isn’t a real person, it’s obvious that Scheller and Bell took a lot of inspiration from other moms from mommy groups and the women around them to shape Audrey and the other characters from the show. In that respect, yes, she’s based on a very real collective idea of what women go through.

Regardless, there’s a certain comfort that Audrey provides to pretty much any mom who watches the show to let us all know that our concerns and struggles are totally normal. We are not alone.