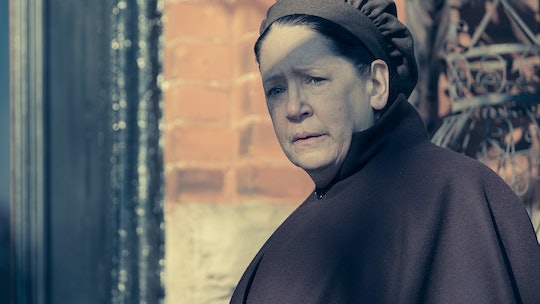 Praise be. After an agonizing year-long wait, Hulu's adaptation of Margaret Atwood's The Handmaid's Tale returns for its third season on Wednesday, Jun. 5. Although fans are hyped to see what's on the horizon for Gilead in the upcoming season, they also can't help but reflect on the cliffhangers that occurred in the Season 2 finale, including Aunt Lydia's (Ann Dowd) brush with death. So is Aunt Lydia dead on The Handmaid's Tale? Buckle up, because even a stab to the back won't keep the militant character down for long.

In The Handmaid's Tale Season 2 finale, Emily (Alexis Bledel) left the Colonies and returned to Gilead under a new commander named Commander Joseph Lawrence (Bradley Whitford). When Aunt Lydia came to check on Emily, she scolded the handmaid for not appreciating the second chance. Aunt Lydia turns to leave, but in a shocking turn of events, Emily stabs her in the back — both figuratively and literally. Emily then pushes Aunt Lydia down the stairs, leaving her bloodied on the floor. Sadly, this is the last time fans see Aunt Lydia onscreen, but rest assured, she is not dead.

According to The Wrap, The Handmaid's Tale creator, Bruce Miller, revealed that Aunt Lydia is alive.

“Aunt Lydia doesn’t die," Miller explained, following the Season 2 finale. “I don’t think Aunt Lydia can die. I don’t think there are forces in the world strong enough to kill Aunt Lydia. And by extension, the incredibly strong, fabulous Ann Dowd I think is with us for a long, long time, as well.”

That said, Aunt Lydia's altercation with Emily does change her in the upcoming episodes. Per Forbes, Miller explained how Emily's actions alter Aunt Lydia's character in Season 3.

Overall, Aunt Lydia is transformed by this one event. “She thinks there’s love between her and her girls,” Miller said. "The fact that one of her girls has literally stabbed her in the back, I think that alters your workplace feelings on a day to day basis. So, I think that in some ways there are a lot of possible effects. But, I think in her case, it makes her double-down. She feels like she just wasn't strong enough in her discipline. So, she has decided it's time to get tough.”

In an interview with The Guardian, Dowd also touched on the development of her character in Season 3, and it certainly looks like fans will get to see a new side of Aunt Lydia.

“The creepy thing about Washington, other than the veils, is that everyone seems to be so in compliance. People have either given up or it’s like in North Korea, where you don’t even dare step out of line," Dowd shared. "This is not Aunt Lydia’s thing. She doesn’t believe in these extra, more extreme steps. She just wants to go home."

For the past two seasons, Aunt Lydia's utter faithfulness to her girls has been unmistakable. In a previous interview with Newsweek, Dowd explained that Aunt Lydia's "devotion to [the handmaids] is real. She believes that without her, they cannot become the women they need to become to stay alive and have a meaningful life. I think she would go to her dying breath with that belief."

Now, with Season 3 coming around the corner and the show's creator teasing "tough" times ahead, I'm interested to see where The Handmaid's Tale team takes Aunt Lydia — no matter how wild or misguided.