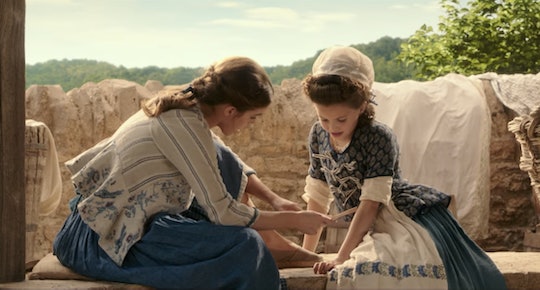 Should You Take Little Ones To 'Beauty & The Beast'?

It's almost hard to believe that after such a long wait, the live action Beauty and the Beast is finally out in theaters. If you have kids, you probably want to take them along for the ride to see the classic fairy tale, but there are enough spooky moments in the original story that you might want to go check it out alone first to see if Beauty and the Beast is appropriate for kids under 5 years old. While it is ultimately up to you as a parent to take your kid to the film, rest assured that the story sticks to the original film and parents who know that will probably find the "tale as old as time" great for a family outing.

The live action version, starring Emma Watson as Belle and Dan Stevens as the Beast, follows the same plot as the 1991 animated version, but it's rated PG, which means that there is a little light violence. To balance that, there are a lot of uplifting moments, like "Be Our Guest," which is still one of the highlights of the movie (just like its animated counterpart). And, as fans of the original will note, the film finishes with an ending exactly like the original.

Another thing that some might wonder is if the plot is something that a toddler will pick up on entirely. While some of the ideas are a little more advanced (remember: this film also caters to the parents in the audience), the new film is pretty canon to the original film, so if your kid can follow that, they will definitely be able to follow the live-action.

Ultimately viewing this movie with your toddler is completely up to you. There are parts that will absolutely capture the attention of a child (if not all of it). It is fantastical, grand, and beautifully shot. The visuals of the film, plus the real-life animation of everyday items will undoubtedly bring some magic to your child's life. Plus, there's a ton of singing, and who doesn't love watching a candlestick and a clock sing their way through a five course meal?