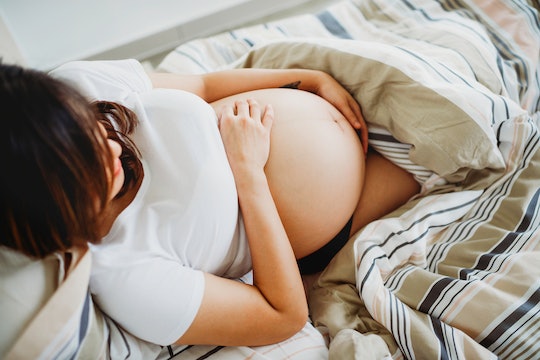 Here's Why Bed Rest During Pregnancy Can Be Risky, Doctors Say

Towards the end of pregnancy, the idea of a doctor’s order to remain in bed until labor begins might sound really appealing. However, in recent years, medical professionals have re-examined the question: Is bed rest during pregnancy safe for mom and baby? Much to the dismay of exhausted pregnant women everywhere, experts determined that the treatment is often ineffective and can even put mom and baby at risk.

At one time, strict bed rest was commonly prescribed to women who were pregnant with multiples, and was often suggested to moms-to-be who showed signs of early labor or suffered from conditions like cervical insufficiency, preeclampsia, and/or placenta previa.

Since then, the American College of Obstetricians and Gynecologists has actively advised against bed rest during pregnancy. In fact, they actually encourage regular physical activity for all women experiencing healthy pregnancies, including those with a history of preterm labor.

“If a woman is at such high risk that she can no longer perform her activities of daily living, she would be admitted to the hospital” to receive antepartum care, Elizabeth Coviello, D.O., Assistant Professor of Maternal-Fetal Medicine in the UNC Department of Obstetrics & Gynecology, tells Romper.

Peter S. Bernstein, M.D., M.P.H., Director of Maternal-Fetal Medicine at Montefiore Health System and Professor of Obstetrics & Gynecology and Women’s Health at the Albert Einstein College of Medicine, also strongly agrees with current recommendations, telling Romper that there would “never” be a circumstance in which he’d recommend 100% strict bed rest to a patient since “there is no evidence that strict bed rest improves pregnancy outcomes.”

Not only does it have no impact on preterm labor, but there are actually known risks associated with strict bed rest. Dr. Coviello says that the treatment “can increase the risk of [a] woman developing a blood clot, known as a DVT (deep venous thrombosis).” She also says that women on strict bed rest “are at increased risk of developing… mental health disorders like anxiety and depression.”

Despite those risks, there are some situations where physicians may recommend modified bed rest to a patient. Dr. Bernstein explains that modified bed rest is “staying in bed and resting most of the time, but getting up when needed to tend to activities of daily living, such as washing up, preparing dressing, [or] using the restroom.” Dr. Coviello adds that modified bed rest could also mean "avoiding strenuous activity like prolonged standing, lifting heavy objects, or activity that may stress the body.”

Even though modified bed rest does allow the patient to get up and move a little, physicians agree that it should not be prescribed unless absolutely necessary. Some situations that may call for it include premature dilation of the cervix, preeclampsia, or signs that point to an extreme risk of preterm labor. Even in those cases, Dr. Coviello says that “a conversation between the healthcare provider and the patient should always occur" prior to treatment to ensure that it's the best course of action.

Despite how miserable the end of pregnancy can feel, getting up and moving a little every day is generally far better for a pregnant woman and her baby than staying in bed all day. By concentrating on maintaining good physical, mental, and emotional health, a pregnant woman is doing everything she can to keep herself and her baby as safe and healthy as possible... no bed rest required.

More Like This
Are You Leaking Amniotic Fluid Or Is It Normal Discharge? Experts Explain
New Report Shows 80% Of Pregnancy-Related Deaths Are Preventable
27 Sweet & Strong Boy Names That Start With “S”
25 Baby Girl Names That Begin With D