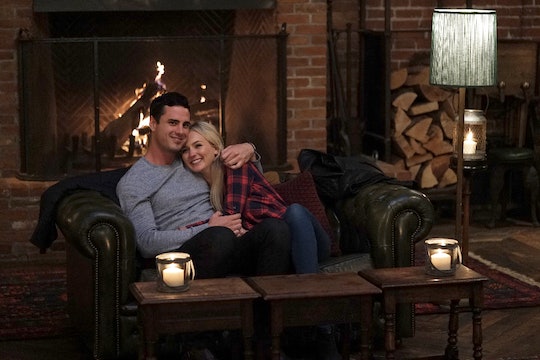 Is Ben Engaged To Lauren? The 'Bachelor' May Have Dropped A Big Hint This Week

We are rounding the corner to the end of Season 20 of ABC's The Bachelor. And what's that we see in the distance? Is that a man down on one knee proposing to the love of his life? Do we hear wedding bells ringing loudly? Do we see the rustle of a white dress? Long blonde hair? Is Ben Higgins engaged to Lauren Bushnell?

We're going to have to wait until March 14 to find out for sure, but there have been a few hints along the way to help us solve the mystery. Not the least of which being when Ben went on Good Morning America yesterday and let the bomb drop that he is, in fact, engaged! Yes, ladies, it's true that Ben Higgins is officially off the market. Now at this point he could be engaged to either of the final two girls, JoJo Fletcher or Lauren Bushnell. He did tell both girls he loved them on the Feb. 29 episode, "Jamaica" (also known as the much anticipated episode for "fantasy suite" dates). Caila Quinn was sent home last week after Ben admitted to JoJo and Laren that he loved them both. Which obviously leaves him in an incredibly difficult position for this week.

Lauren has been the frontrunner in the eyes of many fans for quite some time. And Ben has made no secret of his super obvious adoration of the sweet-natured blonde Lauren. The two seemed well matched right out of the gate. And I feel like it's a good sign when fans are making video montages documenting their love.

So okay, now that Ben let the cat out of the bag, we know he is definitely engaged. According to Bachelor gossip king Reality Steve (get ready for a serious spoiler here just in case he is correct), Ben and Lauren are engaged. Now to be fair, Reality Steve himself admits he's not always correct. But I think if you pair his prediction with the general feeling on Twitter, you might come to the same conclusion. That Ben has had his last first date, that JoJo Fletcher has gone the same way as Caila Quinn et al and might even be a contender for the next Bachelorette (??). And that Ben and Lauren are all set to become man and wife.

Fans could be wrong, naturally. He could very well be engaged to JoJo. As one fan pointed out:

Still, my money is on the Ben/Lauren duo. Yes, JoJo might have promoted The Bachelor on Instagram, but I think it would take a little more than that to sway Ben.

I guess we'll just have to wait and see what happens on March 14 at 9 p.m. ET on ABC. Until then, it's all just spitballing.