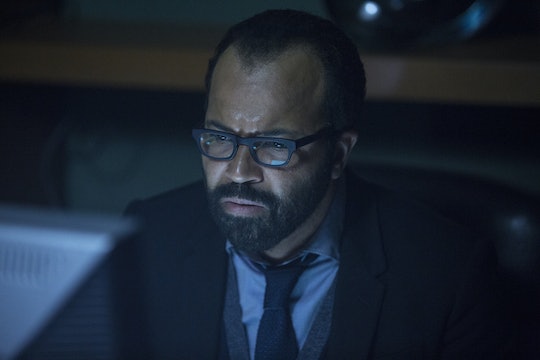 Is Bernard A Robot On 'Westworld'? A Major Fan Theory May Have Been Confirmed

Since the series began, new Westworld fan theories have been cropping up near-constantly. Some theories have to do with the possibility that we are unknowingly seeing time-jumps, that two characters might be older and younger versions of the same man, and that one or another character is secretly a robot. Among the latter category, several maybe-robots have been theorized about – but one might actually have been explicitly confirmed in the latest episode, "Trompe L'Oeil." The closing moments of the episode left us with one major question: Is Bernard a robot on Westworld? It's a theory that we've explored before, and the season's seventh episode may have just settled it.

"Trompe L'Oeil" forwarded several plots simultaneously. Dolores and William got much (much) closer (both to one another and, presumably, to finding the maze). Maeve, spurred on by Clementine's heartbreaking fate, made a big decision about her future at the theme park. Theresa and Delos Board Executive Director Charlotte Hale's collusion was revealed in further detail. But, most strikingly, Theresa (and the viewers) learned more about what Ford has been up to in his secret Westworld hideaway.

Charlotte and Theresa conspired to oust Ford by forcing him to admit that he'd programmed the reveries which caused the violent, guest-threatening host malfunctions (malfunctions which they faked in Clementine, to make their point) – a conspiracy which, ultimately, failed, leading to Bernard being fired. After that debacle, Bernard led Theresa down to the house kept hidden from the hosts and the rest of the park's employees. Once there, they discovered something shocking and game-changing.

If you haven't caught up on 'Westworld,' stop reading here because major spoilers for the season follow.

When Bernard first took Theresa to the house where Ford had kept his family robot-replicas, it didn't seem particularly suspicious at all. Rather, it seemed as though, in the wake of his firing, Bernard was about to disavow Ford completely and clue Theresa in to the off-the-books work that Ford was doing there. But once Theresa asked Bernard what was behind the door and Bernard responded by saying "What door?," not able to see it at all until Theresa opened it – well, that should have been the first clue that something was not quite right.

The two former lovers descended into the secret lab beneath the house, where Bernard explained that Ford and his former partner Arnold had kept remote diagnostic facilities in the park, back in its early days. While there, they discovered machinery of the same type used up-top at their normal labs – Ford was making his own hosts in his secret lab. As Theresa was rifling through the papers scattered around the lab, she discovered several sketches for host plans. Among them was one for a Dolores prototype, one for Robert's younger self robot replica – and one for Bernard himself.

When Theresa pointed it out to Bernard, he echoed the now-iconic phrase uttered by any host who sees something that would otherwise cause them to question the nature of their existence: "Doesn't look like anything to me." If there was any doubt about whether Bernard and Ford were just playing an elaborate trick on Theresa, and that Bernard wasn't actually a robot, that doubt was eradicated when Ford was able to stop a panicking Bernard in his tracks by saying, "That's enough, Bernard." Bernard froze ("powering down") instantly, as we've seen the other hosts do time and again whenever Ford commands them to.

This turn of events begged so many questions. For instances, if Bernard has been at the park for years, how has no one noticed that he hasn't aged? Or has Ford been aging him up in increments, to avoid suspicion? Are there multiple Bernards at all different ages kept in one of Ford's secret labs? Or has Bernard not actually been at Westworld as long as he's been programmed to think he has? Did Ford purposefully implant Arnold's own backstory into Bernard? He did say, when discussing his former partner with Bernard, that Arnold had suffered personal tragedy that drove his work with the hosts – did the "real" Arnold have a deceased son, as in Bernard's backstory?

Hopefully, these questions will be addressed – to some degree – before the season's end. For now, my head is still spinning from that incredible reveal.