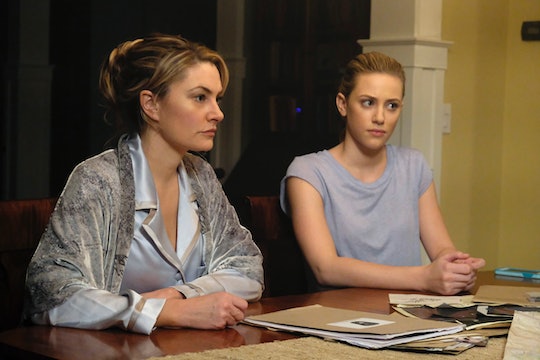 On a show where almost everyone is a suspect at some point when there is a serial killer involved, it’s never too soon to wonder about each character, including those who haven’t even come into play yet, like Betty’s brother, for example. So, is Betty’s brother the Black Hood on Riverdale? At this point, anything is possible and it would give him a reason to finally show up in town, unbeknownst to Betty and her parents. However, it would have to be done with some clever planning, like explaining the true motive behind why he's killing all of these people in the first place.

In the letter sent to Betty, the killer said that his reason for committing the crimes was fueled by a need to cleanse the town and rid it of the criminals, adulterers, and general sinners. Could this motive fit with whoever Betty’s brother turns out to be? According to the official cast breakdown for the character, Betty’s brother, Chic Cooper, is going to be someone who’s a little rough around the edges and who’s lived on his own since aging out of foster homes when he turned 18. The character description, as reported by Screen Rant, includes that Chic has been forced to be "tough, resourceful, rough around the edges, and distrustful of new people. He knows how to look out for himself — he’s a survivor — but his mysterious past is a secret only he knows."

Did he become the Black Hood as a way to get revenge on his biological family, who basically abandoned him from infancy? It's possible, but that wouldn’t exactly explain all of the deaths so far. I mean, it's not as if Betty was ever close to Miss Grundy, so killing her wouldn't directly hurt Betty or her family. It's also interesting that the Black Hood is someone who knows quite a bit about the residents of Riverdale — like Fred and Hermione's relationship, as well as Archie’s secret affair with Miss Grundy.

Unless the Black Hood is someone viewers already know, then Betty’s brother could have been watching from the sidelines this whole time, learning about all of the drama and relationships from Season 1. Although there’s still a lot to know about Betty’s brother overall, his motive for wanting to hurt others around his family could be explained by Chic’s own past.

As far as we know, Alice and Hal conceived Betty’s older brother when they were teenagers and ended up giving him up for adoption directly after his birth. Meanwhile, they made a life and a family for themselves in Riverdale while Chic has been living a rough life without any of their help. In the world of Riverdale, that’s probably enough to drive someone to be a killer — and use it to get his family's attention.

Betty’s brother isn't set to appear until midway through Season 2, but as TVLine reported, he will then be a recurring character for the remainder of the season. If the writers plan on having him stick around, then odds are he's going to be given a pretty fascinating story arc. And what's more fascinating than watching Betty discover that the sibling she's only just getting to know is actually the masked murderer she's been searching for?

A twist like that definitely seems right up Riverdale's alley. We'll just have to see what happens once he's officially introduced.