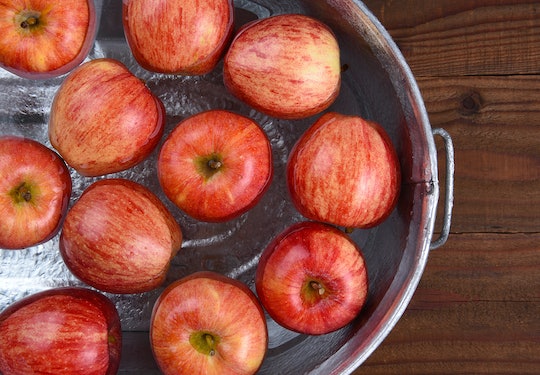 There are certain signs that cement the ending of summer and declare the official arrival of fall. The leaves change to hues of orange and red, your local stores begin stocking up on pumpkin flavored everything, and you find yourself digging in your closet for scarves and cardigans. Along with autumn comes many wonderful seasonal traditions, like Halloween and bobbing for apples. While Halloween safety is usually clear cut for children (don’t eat unwrapped candy, stay in well-lit areas), there isn’t much that answers the question, is bobbing for apples safe? Obviously, you'll want to be careful with kids and water, but what else should you know about this fall activity?

Apple bobbing is a pretty easy and straightforward activity. According to Martha Stewart, for apple bobbing, you start by filling a tub with water and apples, and then let children bend over the tub, while they try to pick apples up by biting down on the stems or the fruit itself. While it may seem like innocent and harmless fun, introducing the bacteria from the mouths of various children to a standing bucket of water may not be an ideal situation.

To find out how safe bobbing for apples really is for young children, Romper reached out to pediatrician Dr. Jarret Patton. “Your kid could very likely get something more than an apple after bobbing," warns Patton. He explains that most pathogens, like viruses and bacteria, are transmitted from person to person through their mucous membranes, which means that the areas around your nose, mouth, and eyes are especially vulnerable. “Your child could catch something like a common cold, but could catch something worse," he adds.

The pathogens that cause disease, explained The National Academies, including microorganisms like E. coli and Salmonella, can be transmitted through contaminated water, and microbes that cause infections like influenza, or the flu, can be contracted through bodily fluids, like mucus in your nose. So if a sick child sticks his face into that tub of apples, there is a risk that your child can catch his illness.

But catching something isn’t the only safety issue to worry about. In an article in The Journal, eye surgeon Dr Kathyrn McCreer of Our Lady’s Children's Hospital, noted that there is a risk of eye injury when apple bobbing. She explained that the stems of the apples could scratch the surface of the eye when a child bends down to grab it, and she further noted the risk of eye infections that can be contracted through contaminated water.

But if you’re still hoping to add apple bobbing to the list of your fall activities, there may be a healthy way to do it. Southern Living suggested dry apple bobbing, in which you hang apples from strings across a rope, and children can stand under the apple while they try to grab it with their mouths and teeth. This way each kid gets their own apple, and there is no risk of spreading any germs. I’ve seen other Pinterest posts that use hanging doughnuts, which may be easier than hanging apples. (And more delicious, let's be honest.)

While apple bobbing may go back hundreds of years, as mentioned by ThoughtCo, and may have begun as a type of fortune telling, here in the future, there is an abundance of knowledge about how diseases and infections spread. You may want to avoid apple bobbing, especially if you have younger children who can easily get sick, because no matter how fun it may be, it’s not worth your child catching something. And it already sucks enough when your kid picks up something from school or a friend, so adding to the risk doesn’t make sense. The last thing you’ll want to do this fall is have to give up your pumpkin latte and replace it with trips to the doctor’s office.