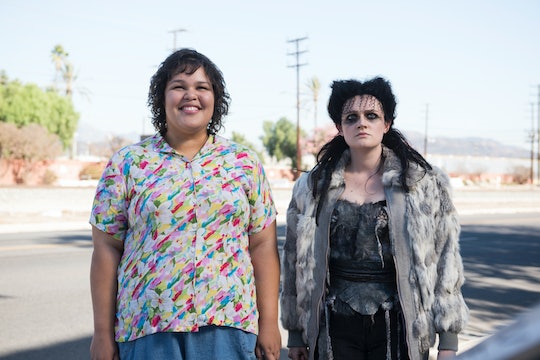 Is Carmen Wade From 'GLOW' Based On A Real Person?

Since the new Netflix show GLOW was inspired by the former '80s wrestling entertainment program of the same name, it definitely makes you wonder what other aspects about the series were taken directly from real life inspirations. Like the women in the ring, including Carmen Wade, who's seen as someone with zero show business experience before she's cast in the show within the show. So is Carmen Wade from GLOW based on a real person?

The Netflix series is inspired by a real show, so it wouldn't be the wildest assumption to think that actress Britney Young is meant to portray a real person, but it looks like most of the characters are completely fictional. According to Vanity Fair, the show itself is inspired by the real wrestling league that became GLOW in the 80's, but that doesn't necessarily mean that the women of the show are based on the women of the original real life league.

Although the original GLOW had a lot more cast members than the group who take to the ring on the new Netflix series of the same name, there's still a possibility that some of the OG wrestling entertainers were used as inspiration for some of the more notable wrestlers like Carmen Wade. Even if it wasn't meant to be an official or full portrayal.

Creators Liz Flahive and Carly Mensch spoke to Yahoo TV about coming up with the different characters for the series and it definitely sounds like, while the inspiration came from the original GLOW, the new series is a fictionalized version all-around.

"A lot of our early conversations had nothing to do with any of the characters," Mensch told Yahoo TV. "We started talking about bodies, and body shapes and how, since this is such a show about bodies, important it was to have all different shapes and sizes in the ring." Meanwhile, Flahive added that: "The joy of the show is that there are 14 women who are distinct characters. Any one of them could have the potential to have a main story."

The format definitely sounds reminiscent of that of Orange is the New Black, which was also based on Piper Kerman's actual time in prison, but loosely so — and involves fictional characters surrounding her. But even if Carmen Wade from GLOW is a totally fictional version of one of the entertainment wrestlers, you can likely bet that she and the other women will make you harken back to the original GLOW cast.

Fans of the original GLOW might speculate on who Carmen Wade is based on in real life, but when it all boils down to it, I think it's safe to say that most of the characters are fictionalized and meant to have their own standalone stories in the new series.

More Like This
'The Last Of Us' Is Based On The Iconic Post-Apocalyptic Video Game
'Velma' Starring Mindy Kaling Is A Raunchy Treat To Stream After The Kids Go To Bed
'Women Talking' Is A Powerful New Movie Based On A Book
When Does 'Yellowstone' Season 5 Come To Peacock? Not Soon Enough
What Parents Are Talking About — Delivered Straight To Your Inbox