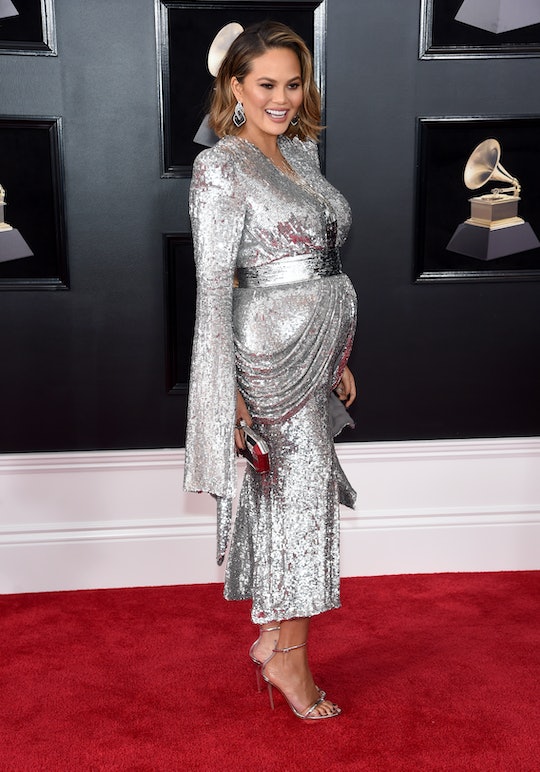 Given that they live much of their lives under the microscope of paparazzi and tabloid headlines, many celebs ultimately choose to avoid social media entirely to protect their private lives. Luckily for us though, Chrissy Teigen is not one of those celebrities. The model, bestselling cookbook author, and Lip Sync Battle co-host also happens to be the queen of Twitter, and since she almost always makes an appearance at the Oscars every year, she's usually also the queen of Oscar tweets. But is Chrissy Teigen at the 2018 Oscars? Fans were naturally hopeful that the soon-to-be-mom-of-two would make yet another appearance on the red carpet with hubby John Legend, but sadly, the star tweeted that this year she was skipping the event (in all fairness though, her alternate plans do sound pretty cool).

Teigen is no stranger to attending glamorous A-list events, and, well, most of the time she shares some truly incredible behind-the-scenes photos and videos on social media (lest we forget the amazing Snapchat she shared after the 2017 Grammy's, in which Legend had to help her remove her jewelry while she sat drunk on her kitchen floor). Teigen tweeted Sunday that this year, however, she was actually "flying to China super late" that evening with her daughter Luna, which meant she'd be skipping the big event. Her absence didn't keep her from sharing some serious Oscars nostalgia on Instagram Saturday though — Teigen shared a throwback collection of photos from her previous appearances at the Academy Awards, and it was amazing.

In the post, Teigen shared eight photos from various Oscar nights she had attended, and in true Teigen fashion, two of them involved food. In one photo, Legend posed with his Oscar (in 2015 he won in the Best Original Song category for "Glory," from the Selma soundtrack, according to TIME), while Teigen posed with, uh, a burger. Another photo showed Teigen dressed in a glam black dress on the Vanity Fair red carpet, and she also included a red carpet snap with Legend during her first pregnancy with daughter Luna. Her hilarious-as-usual caption? "Brace yourself for coral dress - colored contacts and 7 days in a tanning bed ohhhh dear, young Chrissy you kill me."

This time, Teigen had other plans, but that didn't mean she didn't still have time to make food a priority. In a tweet Sunday afternoon, Teigen joked about her taco cravings:

And honestly, even though a night of tacos and a trip across the world does sound pretty fab, there's no question we'll likely be missing out some pretty perfect social media moments with Teigen gone. During last year's award ceremony, for example, fans basically lost it when they caught a glimpse of Teigen napping on Legend's shoulder while Casey Affleck accepted his award for Best Actor, according to Us Weekly:

And let's not forget about the 2016 Oscars, during which time Teigen's amazing "awkward cry face" reaction made a return during Stacey Dash's beyond-uncomfortable Oscar ceremony cameo, according to People (the look had first become a viral meme in 2015, after Teigen made the perfect-in-all-situations face during Legend's Golden Globes acceptance speech).

Given that Teigen is not actually nominated and, well, not even an actress, it makes sense that she might decide to skip out on this year's awards (even if she didn't have a flight to catch, she does have a young daughter and is also pregnant). But, let's be honest: is there anyone else who can provide so much incredible Twitter meme fodder than Teigen? Better yet, is there anyone else who will actually happily share that meme fodder herself with millions of online strangers?

The Oscars are an important night of celebration for Hollywood's actors and filmmakers, and the winners definitely deserve recognition for all of their hard work and dedication. But as much as I'm definitely looking forward to watching, I have to admit that I am totally bummed that Chrissy Teigen won't be there.