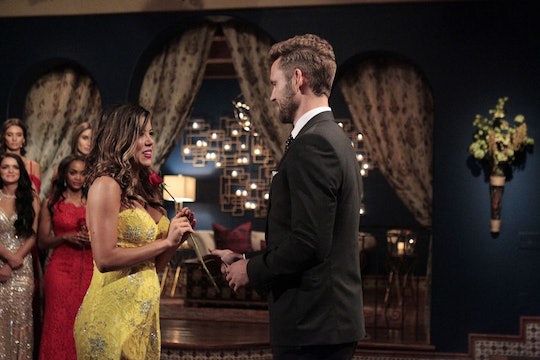 It's always a welcome surprise when love strikes early on in The Bachelor, but in this case, I'm not talking about Nick falling head over heels just yet, but rather fans already loving Christen. She came into the spotlight after being the random confidant that Liz sought to spill the secret about her former hookup with Nick that was clearly bubbling up inside of her. And while Christen didn't do anything wrong by telling Nick, it also may not have done her any favors to get involved. So is Christen single after The Bachelor?

The Season 21 contestant has a bigger mission she's working toward outside of The Bachelor world. Judging by everything in Christen's social media world, it's safe to say that whether or not she makes it far on The Bachelor, she seems to be currently single and focusing on other, more important things in her life. The 25-year-old wedding videographer and dance instructor from Tulsa, Oklahoma also works with the non-profit Two Cents Project, which involves her traveling to different cities and hearing the stories of the homeless and less fortunate and acting as a missionary.

On the website, the organization is described as "A movement rooted in loving the poor with action in cities across the US. telling their story one life at a time." Christen's younger sisters also seem to be a part of the movement as well, which means that even if Christen is hiding some secret boyfriend, it might not be her main priority at the moment.

If Christen doesn't make it far this season on The Bachelor, there is always the possibility of her returning to TV on Bachelor In Paradise, because even if she and Nick weren't a good match together, that doesn't necessary mean her reality TV love story is over. Plus, fans love her. In fact, there is even an amazing Tumblr page dedicated to Christen gifs already because of her amazing expressions, reactions, and just uninhibited emotions.

In Episode 2, when Liz finally revealed to Nick her true feelings in front of everyone on their group date, Christen was all of us as she watched the awfulness and awkwardness unfold in front of her and for that alone, who couldn't find it in their hearts to love this Bachelor contestant?

So is Christen still searching for love post-The Bachelor? It's still very early in the season, so being able to weed out the ones who don't or won't have a connection with Nick is pretty hard to predict at this point. But right now, I feel like some of the other ladies have a stronger connection with Nick. Not to mention, he'll probably always associate her with the Liz drama from now on, even though she had very little to do with it. But if that's the case, then I hope it won't be the last we see of her up on the small screen.