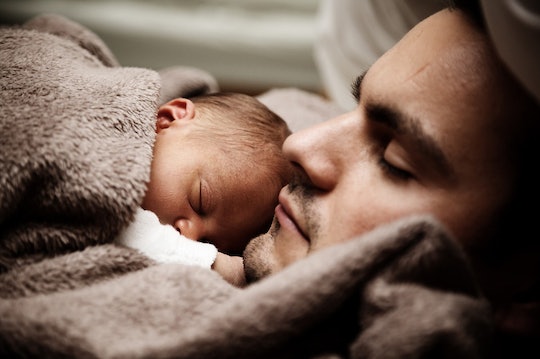 Is Co-Sleeping Legal In All States? Some Prosecutors Are Threatening Action

OK, so now I'm not sure if I should tell you guys this, but I co-slept with my kids. All four of them, probably for way longer than should be "allowed" (since I'm a grown up lady now, I didn't ask for permission so I can't really know for sure). I had babies sleeping in the crook of my arm, toddlers sleeping wrapped around my waist, little sons sleeping curled up at the foot of my bed. Does this mean I could go to jail, do you think? I'm wondering if co-sleeping is legal in all states, and sort of glad I live in Canada if it's not. You know, just in case.

Apparently there are some pretty serious concerns about co-sleeping in some states, although the good news is there aren't any states yet who have actually made co-sleeping illegal. While many cultures have embraced the subtle art of co-sleeping (defined by Yours Truly as the only way I could get a guaranteed six hours of shut-eye for nearly a decade), not everyone is so convinced.

In fact, one Indiana attorney even thinks parents who co-sleep should be prosecuted. According to Parenting.com, Delaware County Prosecutor Jeff Arnold has been concerned about infants who have died as a result of co-sleeping, and wants to prosecute parents in these cases. In 2012, he told the Indiana News Center, “I’m not going to overlook that anymore as stupidity, I’m going to try to prosecute those cases."

Arnold told Indiana News Center that he saw nine infants die as a result of co-sleeping in one year. He indicated that he wanted to prosecute in cases where infants had died, but would not prosecute "that parent who just lacks the education or the knowledge to not co-sleep." Arnold also said he would prosecute when drugs and alcohol were a factor.

In the states of Utah and Texas, parents whose children have died as a result of co-sleeping have been prosecuted, and recently a Pennsylvania mother was charged when her 2-month-old baby suffocated in bed with her. As with any parenting choice we all make, good judgment and safety precautions make all the difference in the world. Taking steps like protecting your baby from rolling out of the bed, making sure your baby is on its back, and making sure the bed is large enough for everyone are important. The most important DON'T, of course, is never sleep with your baby if you're under the influence.

Every choice we make as a parent has it's ups and downs. Luckily, the government hasn't decided to step in and make this choice for you yet.