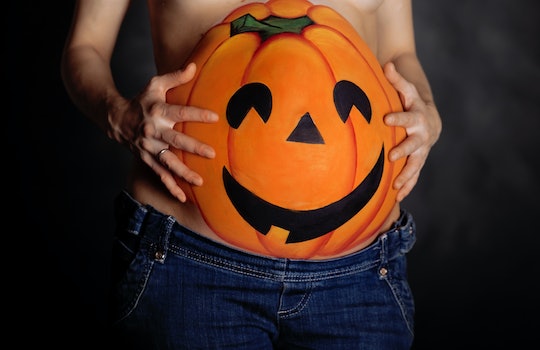 With Halloween approaching, it's time to plan your costume (and grab a PSL). If you're pregnant and far enough along to have a baby bump, you've got an extra element to play around with as you design your Halloween look, thanks to Pinterest. The internet is full of costume ideas for moms-to-be and some of them involve painting your stomach, but should you do it? One consideration is your area's average temperature at the end of October, obviously, but you may also wonder, is costume makeup safe on your baby bump?

In general, it's always a good idea to test any new skin product on a small area first to make sure it doesn't irritate your skin. Skin sensitivity differs from person to person, so just because a product's labelling makes it seem "natural" doesn't mean it won't bother you. But to find out which ingredients to look for and avoid in anything you put on your skin during pregnancy, Romper spoke with Dr. Debra Jaliman, a board-certified dermatologist in New York.

First, Romper asks Jaliman what ingredients pregnant women should avoid in any kind of product they put on their skin. She recommends not buying anything with "retinoids, beta hydroxy acids (such as salicylic acid) and hydroquinone" in it. Retinoid is commonly found in skincare products, especially acne treatments, but is contraindicated during pregnancy because "the effect on the fetus results mainly in craniofacial, central nervous system, cardiovascular, and thymic abnormalities," according to "Retinoids and pregnancy: an update."

Also prevalent in acne treatments, as well as anti-aging skincare formulas, are beta hydroxy acids, which commonly appear as salicylic acid. There is not as strong a link between salicylic acid and birth defects as with retinoids, according to a 2011 article in Canada Family Physician, but there are also no studies proving that topical use of salicylic acid is 100 percent safe. Talk to your personal physician if you have questions about using salicylic acid during your pregnancy.

Likewise, hydroquinone, an ingredient in skin-lightening products, has not been proven to be safe or harmful in pregnancy, but since "35 percent to 45 percent is systemically absorbed following topical use in humans," according to the same article, it's best to avoid it while pregnant.

As far as makeup is concerned, Jaliman suggests choosing products that are "paraben-free and fragrance-free." Parabens act as preservatives and prevent bacteria growth, according to Real Simple. While they have been in use for over 50 years, recent concerns about parabens stem from their status as "xenoestrogens," meaning they act like estrogen hormones in your body. There isn't any conclusive scientific evidence linking parabens to cancer or other illnesses, but it doesn't hurt to take precautions during your pregnancy. After all, hormones are wreaking enough havoc on your body already, right? No need to add an artificial one to the mix.

Whether you put makeup on your face or use it to create a bump-centered Halloween costume, Jaliman offers the reassurance that "makeup and lotions applied directly around the uterus won't be absorbed by the fetus." So there is no special risk in using costume makeup on your baby bump as opposed to your face, for example.

Now that you know how to read the ingredient list with expert eyes, you'll want to know where you can buy a safe costume makeup kit. Proud Body sells an "FDA-approved Pregnancy Belly Painting Kit" ($17) specifically for this purpose. Amazon features a variety of face painting kits including a 12-color palette from Blue Squid ($23) and "Face & Body Paint Kit" from Artiparty ($20), both of which claim to be FDA-approved, paraben-free, non-toxic, and safe for sensitive skin. Do your homework and you'll have the cutest pumpkin belly this year.