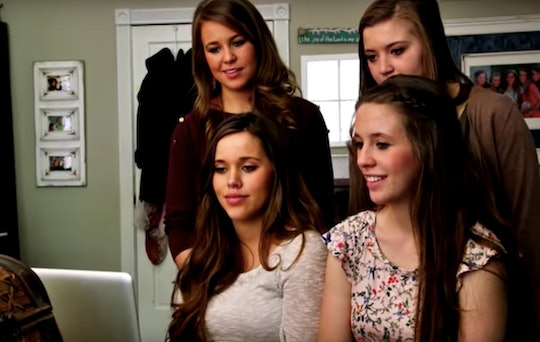 Despite all of the scandal surrounding the family, fans are still dying to know whether TLC's Counting On is cancelled or not. The show has been off the air for several weeks now and there hasn't been any word from the network about whether it is being renewed for another season. Romper's request for comment from TLC representatives was not immediately returned. And, as it turns out, the family doesn't really know what's going on either. On Sunday, the Duggar family wrote on their blog:

Counting On has been off the air for six weeks now, and we know you all are eager to hear whether the Duggars will be returning for a new season. We have been in contact with TLC, but at this time, there are no announcements to share. As soon as there is news to give, we will post it here. In the meantime, we're curious to hear what you like most about the show and what other TV programs you watch, if any?

Between the hilarious insinuation that their fans might only watch Counting On (if any?) and the fact that they've been "in contact" with the network, it sounds like the Duggar family is hitting a low point. Counting On was TLC's response to the original Duggar show, 19 Kids &Counting, being taken off the air weeks after allegations that Josh Duggar had molested some of his younger family members surfaced, according to E! News. Although the spinoff has been popular, it's also run into some of its own problems.

The show follows the older Duggar children and their own families, most notably Jill and Derrick Dillard. Dillard had been problematic for a few months, initially tweeting transphobic sentiments towards another TLC star, Jazz Jennings, a transgender girl. In November, he tweeted other transphobic things about Jazz and the network.

I pity Jazz 4 those who take advantage of him in order 2 promote their agenda, including the parents who allow these kinds of decisions 2 be made by a child. It’s sad that ppl would use a juvenile this way. Again, nothing about him, just unfortunate what’s on tv these days.

After people called him out for the tweets, TLC released a statement saying that Dillard hadn't been involved with the show for some time. The network tweeted on Nov. 11:

We want to let our viewers know that Derick Dillard has not participated in Counting On for months and the network has no plans to feature him in the future. We want to reiterate that Derick’s personal statements do not reflect the views of the network. TLC is proud to share the story of Jazz jennings and her family and will continue to do so.

Judging from that statement, it doesn't sound like Dillard will be allowed to participate in another season of Counting On, which could mean that the network and the family are trying to figure out how to orchestrate another season without showing him, or possibly even his wife.

After TLC released the statement about Dillard's participation in the show, Jill Instagrammed a link to a GoFundMe account for her husband's missions and cousin Amy Duggar tweeted that people should be "compassionate," though it was unclear whether it was for Jennings or her brother in-law, or simply in general.

On Monday, Dillard tweeted, "never compromise your values for your voice," which could really mean anything. But it sounds like he's standing firm in his beliefs. And, judging by his social media activity as of late, it doesn't really seem like he is upset about being dropped from TLC individually. Whether his family agrees or not, and if they want to keep going on without him, still remains to be seen.