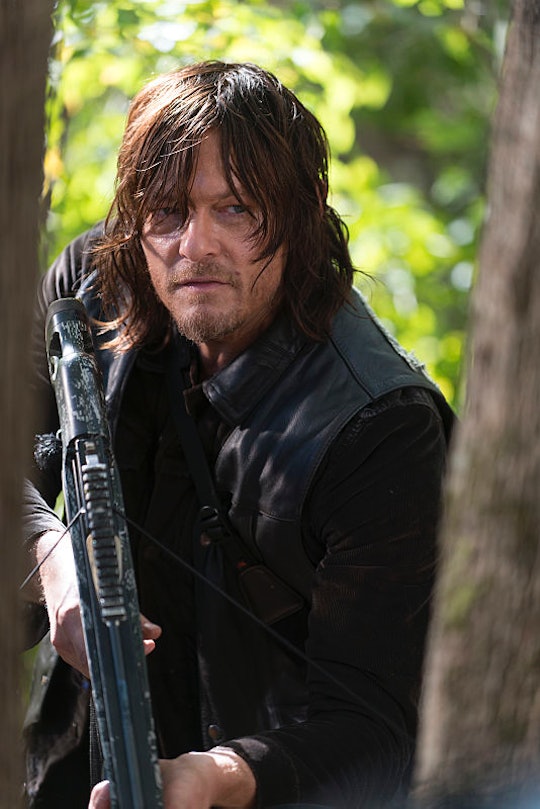 Is Daryl Dead On 'The Walking Dead'? We Really Hope Not

The Walking Dead loves to torture its audience by putting the most beloved of characters in the most precarious of positions. Tonight's episode ("East") didn't end in a question mark for one character – it left the fates of most of Rick's crew up in the air, including one fan favorite who audiences have been fearing for all season. That would be none other than Daryl Dixon, the crossbow-wielding badass who has mumbled his way into the hearts of ladies everywhere. The episode ended with a gun pointed at Daryl and a splatter of blood hitting the screen. But is Daryl really dead on The Walking Dead?

The episode began with everyone in Alexandria on edge thanks to the death of Dr. Denise. Daryl in particular was feeling angsty about it, possibly thanks to all that soda pop bonding he and Denise have gone through. Without telling anyone where he was going or why, he blazed out of town on his motorcycle, with Rosita correctly assuming that he was going after the Saviors that had taken Denise's life. So, running with that assumption, Rosita, Glenn, and Michonne piled into a car to go after him. It would be a decision all of them regretted before too long.

They were able to catch up with Daryl on the site of Denise's death, but they weren't alone for long. The Saviors don't seem to do anything except hang around in the woods and wait for their enemies to wander by, so they find our ragtag group of heroes pretty quickly. Daryl and Rosita separated from Glenn and Michonne as they tried to decide whether or not to go along with his mission to kill the man who killed Denise. Unfortunately, the Saviors found them first, and Glenn and Michonne were captured.

It seemed like maybe the episode was just setting up for Daryl (and Rosita) to appear out of nowhere and save the day as he's done so many times before. That outcome appeared assured as we saw Daryl sneaking up on the Saviors' camp, where Glenn and Michonne were helplessly tied up. Daryl had gotten them out of worse scrapes before thanks to some aggressive firepower but none of them would be so lucky this time.

Dwight is the Savior Daryl has had the most interactions with, who captured him once and also murdered Denise – using Daryl's trademark crossbow. And he's the one to catch Daryl unawares, with one muffled warning from Glenn not enough to prepare Daryl for Dwight's sneak attack. The episode ends with everyone in dire straights: four characters taken prisoner, and one of them possibly dead. But it just seems too impossible, too terrible, for Daryl to get taken out so quickly. Just after the sound of the gunshot, we hear Dwight say, "You'll be alright." We don't know if Daryl will be, but until we find out, we are certainly not.