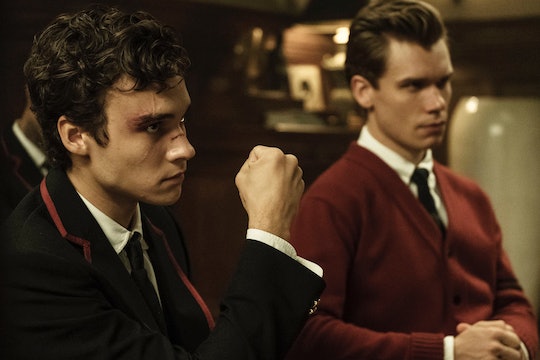 'Deadly Class' On SyFy Already Has A Steady Following

SyFy’s Deadly Class is the '80s coming of age anti-superhero show you never knew you needed. With the absence of heroes and the abundance of assassins in training, however, it still seems like something straight from the comic book world. So is Deadly Class based on a comic book? If you guessed that the new action series originated in comic book form, you’d be right, but it’s from Image Comics, which is most famous for The Walking Dead and Spawn.

Deadly Class started as a comic book series in 2014. The different origin stories of the main characters, as seen on the TV show, drive the different subplots and definitely leave fans wanting more. Since 2014, there have been eight different volumes of the Deadly Class comic book with four to six issues each. There are also two deluxe hardcover editions that split all of the comic books into two separate books. Volume 8 will be officially released on April 16, so it's safe to say they’re still making the comic book while the show is in production, much like The Walking Dead. Whether or not it will have the same success remains to be seen.

Most of the same characters in the TV show at King's Dominion Atelier of the Deadly Arts are from the comics, although the show does expand on the details a little more. Master Lin, the headmaster featured in the comics, plays a big role in the series, as do Marcus, Maria, and Chico. Their personalities are a little more fleshed out in the series.

Michel Duval, who plays Chico on Deadly Class, told ComicBook.com that he wanted the show to bring more dimensions to the character than the graphic novel has. "I didn’t want him to seem like just the school bully because there’s so much more to that character," Duval said, of Chico. "Let’s give him his own presence. Let’s make this villain different. Let’s not make just a one-dimensional bad guy who likes to do bad things."

Luckily, Deadly Class pays homage to the comic books that started it all while also bringing all of these characters to life on screen. The TV show follows all of the students, both bad and not so bad, at King’s Dominion, while diving into their pasts a little bit too.

In the comics, there are extensive backstories for each character that I expect to see at least a portion of in the show in order to really get to know them. It’s hard to say if the series will eventually catch up with the comics like The Walking Dead did or if things will veer off path and the writers will take more creative liberties as the episodes progress. Either way, fans of the original comics will likely be satisfied with all of their favorite teen assassins for hire come to life.

You don't have to know much about the Deadly Class comics to understand or appreciate the series, but for the first season at least, it might be a nice guide to help you keep track of who everyone is and how they know each other. Like The Walking Dead, there’s an in-show universe unique on its own with plenty of layers to get through.

In July, some of the Deadly Class cast revealed to IGN that the show tries to be as true to the comics as possible as far as gore and adult situations go. As long as it doesn't veer far from the comics that started it all, I’m sure fans will be satisfied.