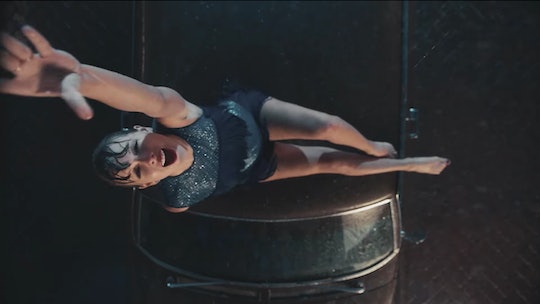 Fans Think “Delicate” Is Definitely About Joe Alwyn, & They’ve Got The Receipts

Leave it to the Swifties to spend the entire morning after a new Taylor Swift music video drops analyzing each and every frame. At Sunday night's iHeartRadio Music Awards, the singer released the music video for the song "Delicate," off her album Reputation. It's pretty typical for Swifties to put their critical thinking skills to use in this way — but her latest video has prompted many to wonder: Is "Delicate" about Joe Alywn, Swift's rumored boyfriend? Fans had already theorized that "Delicate" was about Alwyn based on the lyrics, but the video is chock full of references to Alwyn that further confirm the speculation.

Rumors about a possible relationship between Swift and Alwyn, who is an actor and model, first surfaced in May 2017. By the time Reputation dropped in November 2017, Swift liked a Tumblr post that said that every love song she wrote for the album was about Alwyn, which fans took as a confirmation of the theory. Though it's worth noting that neither Swift nor Alwyn have never verbally confirmed the rumors.

In the music video, Swift is being interviewed outside a fancy event when a mysterious stranger hands her a glowing note. She then moves through the motions of a night out in the public eye — her security guards follow her every move, a bellhop jumps on her, fans mob her for photos, etc. Then, all of a sudden (well, while she's making goofy faces in the mirror of a bathroom), she suddenly becomes invisible, free to do whatever she wants, seemingly because of the magical note. She sheds her shoes, rips off the bottom half of her dress, and dances through a hotel lobby, on a subway car, and outside in the rain.

The video is full of plenty of easter eggs, but none as notable as the ones that seem to reference Alwyn.

When Swift dances outside in the rain, a sign is clearly visible in the background that reads "Joe's Deli." Sure, there's a chance it could just be a delicatessen called Joe's — but, as fans pointed out, the double meaning is likely "Joe's delicate." Aka the song "Delicate" is about Joe (and he is delicate, apparently).

When Swift dances through the hotel lobby, she shows off some pretty wild moves — and an eagle-eyed fan has a theory about the logic behind them. A few screenshots show that Swift's limbs appear to resemble a J, then an O, then an E, spelling out "Joe." How very "YMCA" of you, Tay.

At the end of the video, a nervous, rain-soaked Swift enters a dive bar ("Dive bar on the East Side, where you at?"), the glowing, magically dry note in hand. A group of people sitting at the bar turn around and stare at Swift, signifying that the magic of the note has worn off and that she is visible again. She then looks at someone and smiles — and some fans think that someone is Alwyn, who is at the very end of the bar. The guy doesn't particularly look like Alwyn, but he also doesn't not look like Alwyn... so it's hard to say whether the theory is true.

Several lyrics in the song seem to be Alwyn references as well. Many think the lyric “Dark jeans and your Nikes, look at you" is a direct nod to Alwyn, who was photographed wearing that outfit on a hike with Swift last week, as per E! News. Fans theorized that he purposely wore that outfit to promote the "Delicate" music video, which dropped just a few days later.

Not to mention, Swift spends much of the video being herself — she truly dances like nobody's watching — so maybe that is meant to suggest that she is able to be herself around Alwyn. The theories will likely continue to roll in for weeks, and it's unclear whether Swift will ever make a statement about the rumored romance.