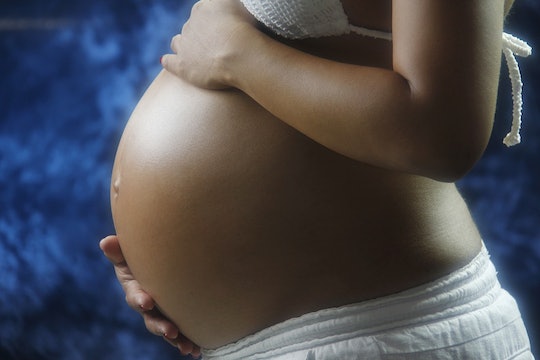 What You Need To Know About Morning Sickness Meds

Romper reached out to the manufacturer of Diclegis, Duchesnay USA, for comment but did not immediately hear back.

The morning sickness pill Diclegis (pyridoxine-doxylamine) has been around for decades. Doctors have been prescribing the pill for women experiencing pregnancy-related nausea since the Seventies, based on a study at that time that claimed Diclegis was effective. New research has found the results of that study to be flawed, unfortunately. Dr. Navrinda Persaud, a family physician from St. Michael's Hospital in Toronto and the co-author of the study shared in the medical journal PLOS ONE, noted that the data in the unpublished study was incomplete.

We found two main problems with the [unpublished] study. Data was missing for 31 percent of participants. There are questions about the integrity of the data.

Because the study was unpublished at the time that its data was used to approve the drug, it was not subject to a peer review. And has been used by millions of mothers since it was approved, even garnering a plug by Kim Kardashian West back in 2015 when she was pregnant for baby Saint West and suffering from morning sickness.

In the caption, Kardashian wrote:

OMG. Have you heard about this? As you guys know my #morningsickness has been pretty bad. . . . I talked to my doctor. He prescribed me #Diclegis, I felt a lot better and most importantly, it's been studied and there was no increased risk to the baby.

Unfortunately, the new research conducted by Dr. Persaud has found that an estimated 35 million mothers who have taken Diclegis may have been mislead. The initial unpublished study was conducted by Merrell-National Labratories (which no longer exists) and was never fully completed. It involved over 2,300 pregnant women in their first trimester of pregnancy in 14 clinics in the United States. Dr. Persaud, who initially began digging in to the research after he realized he had prescribed Diclegis to a patient without knowing much about the data behind it, discovered critical flaws in the research. Around 30 percent of the data was unavailable, the reporting system that spoke to the efficacy of the drug was unclear, and clinics did not collect all of the information from patients that was meant to be collected.

A spokesperson for Duchesnay in Canada told The Washington Post:

We have complete confidence in the safety and efficacy of Diclectin and are very proud to provide it as a safe and effective treatment option for women suffering from nausea and vomiting of pregnancy.

He no longer prescribes Diclegis to his patients.