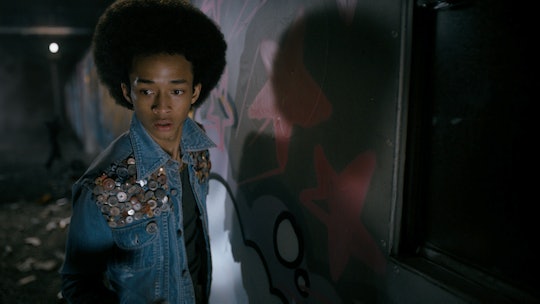 'The Get Down' Seems To End On A Grim Note

Warning: spoilers from Episode 11 ahead! While it's true that The Get Down has yet to be renewed for a second season, fans will undoubtedly be desperate for more, given the way some of the storylines ended in Part II's final episode. Mylene was California bound for her career; Zeke and Shaolin Fantastic had parted ways (potentially for good), and poor Dizzee's fate was left up in the air. But is Dizzee dead on The Get Down? The ending may have left some fans worried about Jaden Smith's future on the show.

After getting chased by the cops, Thor and Dizzee try to make a break for it. However, Dizzee ends up heading into a subway tunnel, and before you know it, there's a train heading directly at him. The camera cut away before viewers could see what happened, so it's difficult to confirm whether he was able to find a place to avoid getting hit or not, which leaves me extremely concerned for his well being. Poor Dizzee has been going through a lot recently and even ended up suffering some serious side effects from angel dust, so I personally feel as though he's been through enough. He's such a lovable character with a lot more story to tell. So this can't be the end of him... right?

It's also unclear what ended up happening to Thor. It felt like he was immediately caught while Dizzee was able to make a better getaway from the police. But even if Thor is sent back to jail, at least we can take comfort in knowing he's still alive. The same cannot exactly be said for Dizzee.

Granted, I suppose it's possible I'm reading too much into this? (Please someone tell me this is the case.) But between the music playing in the background and the scared look on his face, I got the distinct impression that the series was, in a way, saying goodbye to Dizzee. I truly hope this isn't the case because it breaks my heart to even think about it.

The only way to know for sure what happened to him would be if the series comes back for a second season. And if it doesn't, fans will be doomed to wonder about him until the end of time. But considering that the prospect of a second season is looking pretty good at this point, answers should be on the way eventually. In the meantime, though, all we can do is wait and see.