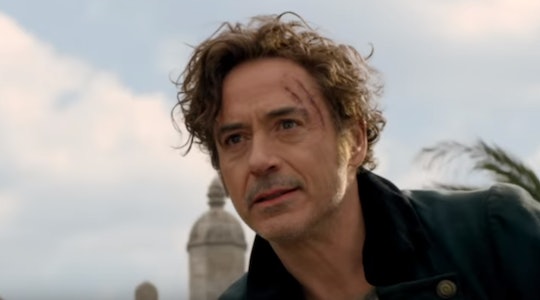 As parents look for ways to keep their kids entertained in the midst of January, one solid option is to hit the theater for whatever new movie Hollywood might have on offer. But it's sometimes a bit of a guessing game as to whether or not it's a kid-friendly choice, as is the case with one flick out this weekend. If you're curious about whether Robert Downey Jr.'s new movie Dolittle is appropriate for kids, the short answer is that you might want to save it for the older ones. Not only could it be a bit confusing for younger children, it also gets a bit violent at times.

Downey Jr. stars in Dolittle, a new version of the old series of children's books written by Hugh Lofting at the turn of the 20th century called The Voyages Of Doctor Dolittle. As most of us are already well aware, Dr. Dolittle can talk to animals, which is a pretty fun storytelling trope from a child's perspective. After all, who doesn't want to know what their dog is really thinking? Many versions of Dr. Dolittle's tales have been produced for both big and small screens over the years, and this new version seems like a guaranteed hit at first blush. Downey Jr. starring as the title character and many other big actors lending their voices to the animals like Emma Thompson, who voices a parrot named Polly, and Spider-Man's Tom Holland as a puppy named Jip.

While some adults might love to hear these actors voicing animals, it might not be something that translates well for younger children. Common Sense Media notes that Dolittle — rated PG and in movie theaters on Friday, Jan. 17 — is a "kid-friendly adventure comedy" that is overall pretty fun, but comes with some darker themes.

For starters, Dr. Dolittle, in this version, is living alone after the death of his wife, which means the movie deals with grief at time. Additionally, there is a bit of violence including knives, guns, and animal attacks that might be upsetting or overwhelming for younger children. Kids over the age of 8, according to Common Sense Media, however, might be able to distance themselves from the violence in the movie, particularly since it is done in a slightly cartoonish way.

If the less-than-stellar reviews from critics haven't steered you away from seeing Dolittle this weekend — the movie currently has a 14% rating on Rotten Tomatoes due to a "jumbled story and stale humor" — mark your calendars for Friday, Jan. 17. And if you're still not sure if the movie is appropriate for your child, you can always watch the trailer with them, as some moments of peril and violence are teased there.