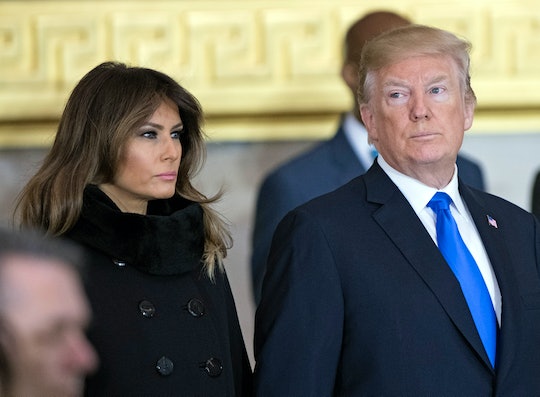 Donald Trump Is More Religious Than You Might Think

It might seem as if anyone on Twitter knows every thought that is on the president’s mind these days, but one thing he doesn’t discuss too often is his faith or religion. President Donald Trump is known to be a favorite among conservative Christians, but where does he personally land on the spiritual continuum? Is Donald Trump religious and has he spoken about his faith publicly?

Simply put, the POTUS does adhere to a Christian faith, according to CNN. Trump previously told the news outlet, "People are so shocked when they find out I am Protestant. I am Presbyterian. And I go to church and I love God and I love my church." That being said, he’s never sought forgiveness from God for his behavior or sins, as he told CNN. "I just go on and try to do a better job from there. I don't think so. I think if I do something wrong, I think, I just try and make it right. I don't bring God into that picture. I don't."

Before his move to Washington, D.C., Trump worshipped at Marble Collegiate Church in New York City, according to The New York Times. The publication reported that he had attended the church’s services for nearly 50 years, but had never formally joined. It is where he married both his first wife, Ivana, and later his second wife, Marla Maples, The New York Times reported.

Trump’s closest spiritual advisor these days is a pastor from Florida named Paula White, according to CNN. Her name leapt into the news after the Access Hollywood tape leaked during the 2016 presidential campaign, when Trump bragged about kissing and groping women.

According to CNN, White was who Trump called to discuss the fallout from the incident and she told the news outlet, “I heard it in his voice. He was embarrassed.” She also said the president is more committed to his faith than many might believe. "If he suddenly came out all religious, that would seem staged to me," White told CNN. "Donald has never been public about his faith, and when he has tried, it has been futile. It's not his language, but that doesn't mean it's not his heart."

Trump has worked hard to gain the support of religious conservatives, even bringing Christmas into the mix. "We’re saying Merry Christmas again," he once said, as the BBC reported, though Newsweek pointed out that Barack Obama also used the phrase Merry Christmas when he was in office.

Though no specifics are really known about the president’s personal Christmas celebration, it’ll likely be one that follows closely with Protestant holiday traditions. Last year, for instance, he and his wife Melania sent out a video message that noted the Christmas story of Christ’s birth, according to the Associated Press.

“[M]ost importantly, we celebrate the miracle of Christmas. This good news is the greatest Christmas gift of all, the reason for our joy and the true source of our hope," Trump said, as the AP reported. Last year, the outlet also reported that he and the first lady attended a Christmas Eve service at a church in Palm Beach, Florida, near his Mar-a-Lago home where he spent the holiday.

So yes, the president is a religious man, despite how things might appear sometimes on his Twitter feed.