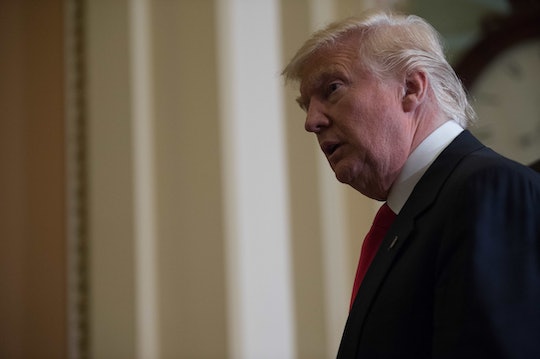 Forget Ronald Reagan, or even Bernie Sanders, when it comes to old men in high places, President-elect Donald Trump wins. Reagan was 69 when he was sworn into office. Is Donald Trump the oldest president ever in American history? Yes — he'll be 70 years old when he takes the Oath of Office on Jan. 20, 2017.

Trump and his surrogates and loyalists took great glee is questioning former Secretary of State Hillary Clinton's "stamina" while also casting doubts on her strength and health and whether she was up to the job. Trump said at an August rally in Youngstown, Ohio, according to the Huffington Post:

Hillary Clinton lacks the judgment, as said by Bernie Sanders, stability, and temperament and the moral character to lead our nation. Importantly, she also lacks the mental and physical stamina to take on ISIS and and all of the many adversaries we face, not only in terrorism but in trade and every other challenge we must confront to turn our great country around.

Now that Trump has been elected, maybe it's time the country start worrying about the President-elect's stamina and health. For starters, Trump loves fast food, which can't be a healthy choice for a 70-year-old man. "It's great stuff," Trump told CNN's Andersen Cooper at a South Carolina town hall last February on the campaign trail.

"One bad hamburger, you can destroy McDonald's. One bad hamburger and you take Wendy's and all these other places and they're out of business," he said. "I like cleanliness, and I think you're better off going there than maybe some place that you have no idea where the food is coming from."

He added that he also loves Kentucky Fried Chicken, which he even tweeted out a picture of himself eating on his plane last August. Notice the knife and fork to keep it classy.

Last Tuesday Trump ditched his press pool to have dinner at New York's 21 Club, where, according to the New York Daily News, he ordered a burger well done and drank a Virgin Mary. Then there's Trump's exercise regimen, which he detailed to America's primary care physician Dr. Oz. It consisted mostly of standing up in front of a crowd of adoring fans and performing word jazz for about an hour or so.

“It’s a lot of work,” Trump told Dr. Oz about his vigorous rally-cise, according to Salon. “When I’m up there speaking in front of 15,000, 25,000 people up there, using a lot of motion, I guess, in its own way it’s a really healthy act. I really enjoy doing it. A lot of times these rooms are really hot, like saunas. I guess that’s a form of exercise.” No, I don't think that's how it works.