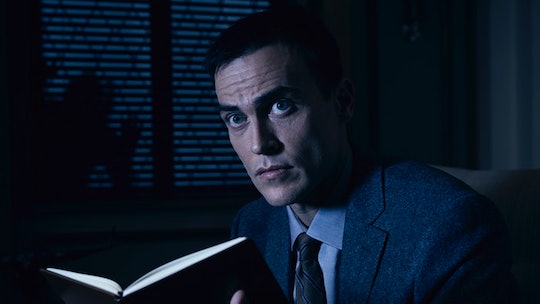 Dr. Rudy May Have An Ulterior Motive On 'AHS: Cult'

On American Horror Story, the plot usually subverts viewers' expectations at some point. So far the biggest example is last season on Roanoke, when the first half of the season turned out to be a series within a series. It was a meta twist that threw me and other viewers. Now, I'm wondering what surprises await on future episodes of AHS: Cult. I'm highly suspicious of Dr. Rudy Vincent, Ally's psychiatrist — and I'm not the only one. Dedicated fans don't think the doctor is who he says he is. But is Dr. Rudy a clown on AHS: Cult? He may not have Ally's best interests at heart.

Poor Ally — AHS: Cult viewers can't help but think everyone in her life is secretly against her! A popular theory among fans is that Ivy, Ally's wife, is actually part of Kai's cult. There are a few clues, like one pointed out by Reddit user jae_sia: Ivy's striped shirt matches a shirt one of the clowns wears. The clowns seem to be just terrorizing Ally now, as opposed to killing her (for reasons I'm sure we'll find out). In some cases, they scare her with her other phobias, such as her trypophobia (the green-haired clown's mask is dotted with dozens of holes). How would the cult know this information if someone close to her isn't a part of it?

This explanation can be used for either Ivy or Dr. Rudy. As with Ivy, there's other evidence to suspect the doctor's involvement as well. The most prominent one is the opening of Episode 3, "Neighbors from Hell." Another patient of Dr. Rudy's, Rosie, told him about her fear of being buried alive. With his help, she's apparently recovered... until one day the clowns descend upon her home. They lock both Rosie and her husband in coffins, where they eventually suffocate. This is not the clowns' usual M.O.; they usually stab their victims. Why did the clowns change their routine for Rosie, and to mimic her biggest fear at that? This is highly suspect, and more than anything makes me believe Dr. Rudy is in on it.

Some of Dr. Rudy's behavior with Ally just feels a little off as well. For example, why did he not contact her when she was missing appointments? He knows how severe her PTSD is, and should've been concerned when she didn't come in. Furthermore, the coral decor in his office triggered her trypophobia. When she told him this, he took it off his shelf and brought it over to her. What!? What kind of psychiatrist method is this? Either he's not who he says he is, or he's just a lousy doctor. This is American Horror Story, where nothing the characters do is accidental. So, I'm inclined to believe the former.

Reddit user YoSoyEpic had a keen eye for another possible clue. During a phone call with Ally in the episode "Neighbors from Hell," Dr. Rudy was rearranging smiley pins on his desk. These pins make sense for a mental health professional to have... but smileys are also the mark of the killer clowns. YoSoyEpic said they believe the buttons "represent the clowns in the cult and he’s scheming on who he is sending to the next victim’s house." Could the blue one be Kai? And the yellow one Meadow? It's certainly possible; perhaps Dr. Rudy is the ringleader all along, not Kai. This theory makes sense when considering Rosie's murder. Dr. Rudy would arrange the whole thing, and have his followers carry it out. This is all speculation as of now, but as the season goes on, I suspect the psychiatrist more and more.