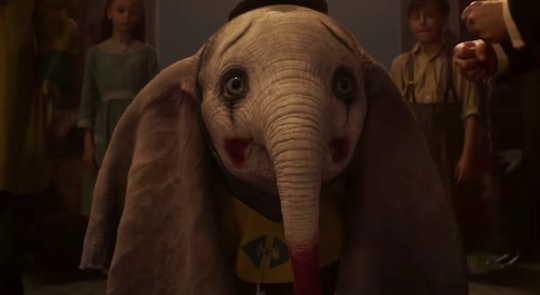 Is 'Dumbo' Appropriate For Kids Under 10? Here's What You Need To Know

Take a Disney movie, add new visuals, actors, and music. What could go wrong as far as taking the kids? A couple things. Disney's new habit of remaking old animated classics into live-action stunners is awesome, but stories seem more real without mere drawings. So is Dumbo appropriate for children under 10? The answer is as mystical as the movie looks.

As with Maleficent, The Jungle Book, Cinderella, and Beauty and the Beast, the movie studio that introduced the world to Mickey Mouse has done it again, with an old story about outdated animated characters getting reborn with prestige actors, top directors, and modern music to create a brand-new experience (without having to start over with a whole new story).

Just like other movies in this new sub-genre, the new Dumbo looks amazing and features the creative genius of Oscar-nominated director Tim Burton, along with the talents of Golden Globe winner Colin Farrell and Golden Globe nominee Eva Green, all as per entertainment website IMDB.com.

Prestige music act Arcade Fire adds to the movie's "cool" factor with a remake of the original's famed song "Baby Mine."

But with live special effects and an edgy new look from a director known for darker material, as the Christian Post noted, just how appropriate will this film, be for younger kids?

As with anything, you, the parent, will be the best judge of whether to pull out those dollar bills and grab a couple seats and a bucket of popcorn for this flick. But from what I can tell so far in researching, the answer is a definite maybe.

For example, it's clear even from the trailer that baby Dumbo gets separated from his mother, which is a traumatic moment. Some children may really be crushed by that, I would imagine.

For another, all you have to do is think back to the original tale to know that Dumbo gets involved with various shyster circus characters, whose mixed intentions and behavior toward the circus animals could potentially scare a sensitive young viewer.

I don't know what it is with kids and animals, but you've got to be careful there. I've had to walk out of more than one movie over the course of three kids... and it was always when there was peril toward a member of the animal kingdom, rather than a person who was hurt or imperiled.

On the other hand, if a kid already knows the story well from the animated version, maybe that's all the desensitization needed to be able to watch the film without too much fright (and then you could see it too — it looks really good, just an idea).

And while Common Sense Media noted that the updated version should include, thanks to Burton, "a potentially dark/creepy tone that might be too scary for younger or sensitive kids," there are some boxes to check on the "Yes, Go" side. The new version "should also do away with some of the original's racial stereotypes, while keeping the positive messages about family and appreciating differences," the site added.

In the "teachable moments" column, I am thinking the movie might open a good conversation regarding bullying and individual differences, since Common Sense Media reminded me that Dumbo's large ears at first make him a victim of teasing, before his magic abilities are discovered.

Overall, Dumbo was given a rating of PG by the MPAA for elements of peril or action, some more mature thematic elements and brief mild use of language.

There are plusses and minuses to taking a younger child to this movie, so weigh your options carefully. After all, if you need to wait, there will be several versions of this kid's classic available to rent or stream down the line.