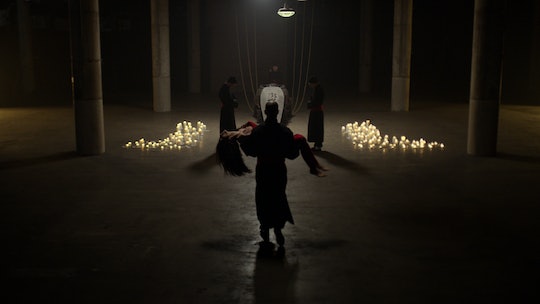 Elektra's Fate Remains Unclear At The End Of 'The Defenders'

The Defenders revealed that the main goal for the five members of the Hand was to be able to live forever. By mining the bones of the dragon that Danny had to kill to become the Iron Fist, the Hand would be able to continue to resurrect themselves for centuries. It's also how they were able to bring Elektra back from the dead. However, after the Defenders blew up the Hand's "source," with Matt and Elektra still in the building, many fans are wondering if Elektra is really dead after The Defenders.

Though the rest of the Defenders believe ever one in the Midland Circle building and under it died in the explosion, it was revealed at the end of the season finale that Matt somehow survived. Therefore, it definitely seems possible that Elektra could've survived as well. Elodie Yung, who plays Elektra, certainly thinks it's plausible. In a recent interview with Entertainment Weekly she revealed that she believes Elektra is still alive, just like most fans. "Well, from my understanding, I'm still alive. You know, [the Hand] gave me this potion to bring me back to life, so that's my understanding of it, but really I have no clue," she said. "I'm just as confused as you, I don't know what's going on."

Though she claimed to know nothing, she raised an interesting question. Is it possible that even though the Defenders blew up the Hand's "source" of survival, that whatever they did to Elektra prior to that makes her impossible to kill? Will she just keep coming back every time she dies, like Harold Meachum did on Iron Fist?

Young seemed to hint at this possible twist when she talked to EW about Elektra's possible motives after taking over the Hand and her fight with Matt. "What [Elektra] wants, in a very Shakespearean way, is to live forever with him. She wants to find him because she wants him to live forever the same way she lives forever," she said during the same interview. "It has to be accomplished through death, but it's a bit like, 'See you on the other side.'"

But if Elektra is alive, where is she? It's possible whoever saved Matt (which many believe was his mother, Maggie), saved Elektra as well and she's also in the nunnery along with him. But if she's not, where did she go? And will she become an even bigger villain after possibly dying a second time? Fans will just have to wait and see when Matt's story continues in Daredevil Season 3.