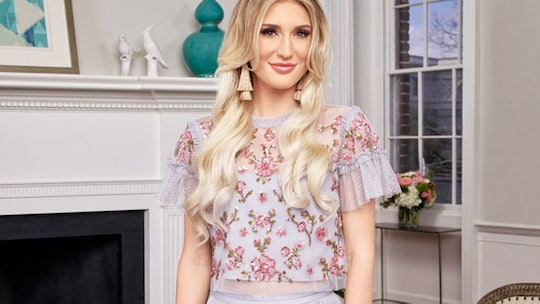 Yes, Eliza Has Friends On 'Southern Charm' — But Does She Really Need To?

Eliza Limehouse didn't make a great impression when she entered the Southern Charm cast at the start of Season 6. Although becoming a new cast member on a longstanding reality show can feel like being the new kid at school, Eliza came in like a wrecking ball and immediately brought up one of this season's taboo subjects — Thomas Ravenel — which obviously didn't sit well with his ex, Kathryn Dennis. Since then, Eliza hasn't been heavily featured on the Bravo show, which has fans wondering if Eliza is friends with anyone on Southern Charm.

In an interview People, the Bravo star explained that it was initially hard joining the Southern Charm cast.

"It was pretty terrible, I’ll be honest. I didn’t feel welcome at all," Eliza said. "I get this kind of freshman/senior mentality from them. Like, I’m significantly younger than everybody, so I definitely felt like I was the ‘kick the cat.’"

Speaking with Newsweek, Eliza described her first appearance on the reality show as a "double-edged sword" where she walked on a thin line between being silent or "over-talking" or "overstepping" her boundaries. That said, she still seems to be hopeful for the future.

"It was a rough start, but it gets better," Eliza said.

Despite her rocky beginnings, it seems that Eliza's fellow castmates are willing to stick by her. On Bravo's The Daily Dish podcast, Cameran Eubanks revealed that she has been friends with Eliza for some time.

"I've known her for years and years. My husband [Jason Wimberly] actually taught her how to swim when she was a kid," Cameran said. "So we've known her family forever. And to me she's always kind of been like a kid sister."

The Bravo reality star also explained that she wanted to keep an eye on her younger Southern Charm costar. "I was very protective of her. And she's a little spitfire, you all will quickly tell," Cameran said.

Following Eliza's less-than-flattering debut on Southern Charm, Cameran also defended the newbie from all the fan backlash. On Instagram, she wrote:

Alright listen here. Eliza is just going through some "growing pains" on the show right now. Y’all Please be sweet to her. She is one of the kindest people I know. This is us, and her sweet Mama at my baby shower (that was not filmed). I hold these people very dear to my heart. Being new to a reality show is going to be nerve wracking to anyone.

Danni Baird and Naomie Olindo are also trying to help Eliza develop friendships among the Southern Charm cast. In an Entertainment Tonight-exclusive clip for the Jun. 19 episode, Eliza went horseback riding with Danni and Naomie. Eliza expressed that she felt uncomfortable and judged when she initially met everyone, and both women offered a bit of advice.

"I think that because you were uncomfortable, too, I think you were overcompensating and trying to be so friendly, so it came off wrong," Naomie said.

Then when Eliza questioned if it was fair for Kathryn to feel angry, Danni explained how she deals with her friend whenever they are on the outs.

"Eliza, I think she has a general trust problem with everybody," Danni said. "I'm even having a weird thing with her right now. She just made a comment that was hurtful. It was absolutely ridiculous … I’ve already versed how I feel. I sent her a text, 'You just spit on our friendship. I hope it felt good.' I could have just brushed it off, but I’m not gonna be anyone’s doormat. I want an apology and that’s that."

For now, it looks like Eliza and Kathryn may not be BFFs on Southern Charm. However, Eliza does seem to be making strides with other cast members, including Cameran, Danni, and Naomie. Regardless, this isn't America's Next Top Best Friend and none of these women should feel obligated to become besties with everyone they meet. And that's perfectly OK.