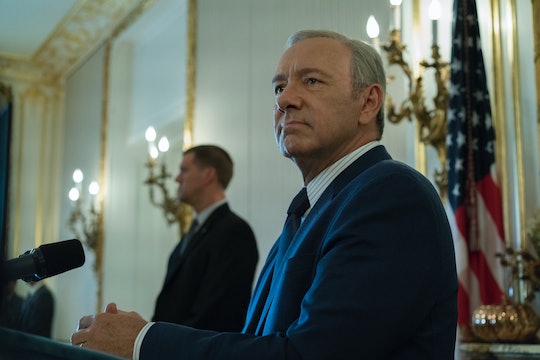 'House of Cards' Takes Things Into The Woods

Nighttime in a thick forest. A group of men chanting, wearing crimson robes and burning a life-sized doll in effigy. Masks, fire, more chanting of "Hail! Hail!" This is how Episode 8 opens, supposedly in the Elysian Fields, where "No women or presidents are allowed." Warning: Season 5, Episode 8 spoilers ahead! Because I assume House of Cards tells me the truth about everything, this scene got me to wondering whether or not Elysian Fields on House of Cards is a real place? And how can I be sure to avoid it at all costs, because a field full of privileged old men chanting in robes is not my idea of a good time.

According to Greek mythology, Elysian Fields (or Elysium) is "the paradise to which heroes on whom the gods conferred mortality were sent." This is meant to be a "place of perfect happiness," found on the banks of Oceanus. So, in other words... no, Elysian Fields is not a real place (unless you take Greek mythology at face value, of course). Elysium is the place for the "Blessed dead," or, if you are a wealthy politician with just a touch too much time on your hands on House of Cards, a place where you can hang out in the woods with other rich guys.

And probably get played by scheming Frank Underwood.

A little recap for y'all: Frank is now in no-man's land. He is no longer president (Claire Underwood is acting president ever since she was chosen by the Senate to be vice president). Both he and Governor Will Conway, who is probably still playing war video games in his living room, are waiting to see who will be declared winner of the 2016 election. And it has all come down to one state: Ohio. Which has Frank visiting the "fellowship of brothers" in the Elysian Fields, a place where "some of the most powerful men in the world are gathered:"

They gather here to seek God between the branches of these magnificent trees. They eat together, they piss next to each other, and between them they carve up the world like a Sunday roast.

Why? He figures they can help him swing the votes of "one measly state."

Once the hoods of those crimson robes came off, a few faces were recognizable. General Brockhart, Will Conway's one-time running mate, as well as businessman Raymond Tusk and Conway's wily campaign manager Mark Usher. The Elysian Fields becomes a weekend long, high-powered camping excursion for rich white guys. Which feels like it could become a movie of its own, I think.

The jury is out on whether or not Frank manages to make a difference in these Elysian Fields. But one thing is for sure; Frank is not a fan of camping.