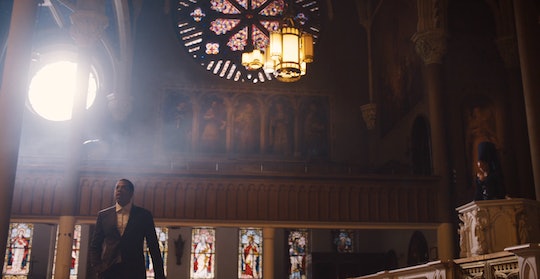 Is JAY-Z's "Family Feud" About His Fight With Solange?

As if the world didn't already spin to Beyoncé and JAY-Z's rhythm, now the axis is truly strumming along to their new song, "Family Feud." The two have been open with their music, sharing everything from life with their children to cheating rumors, but what is this "Family Feud" song specifically about? Is "Family Feud" about JAY-Z and Solange? The world hasn't forgotten about that elevator fight and the song title seems to have some fans assuming, even before the video was officially dropped.

But, within a few minutes of watching the nearly 8-minute long "Family Feud" video, it's pretty apparent that the song and accompanying video are more focused on Beyoncé and JAY-Z's relationship — not the one he holds with his sister-in-law. Once he begins rapping, he specifically mentions being a family man and for "Becky" to get away from him. If you'll recall (which of course you will), in Beyoncé's Lemonade, released back in 2016, she sang about JAY-Z's alleged cheating with the line "better call Becky with the good hair." A circle — I see what you've formed here JAY-Z and Queen Bey. It's a pretty safe bet that when JAY-Z sings "Nobody wins when the family feuds," he's talking about his children, Beyoncé, and everyone involved.

Several months ago, however, JAY-Z shared the meaning of the song "Family Feud" with iHeartRadio and said that the song was more about the family of rappers feuding. "Family Feud is about separation within the culture. Like, new rappers fighting with old rappers, saying all these things. So, the line is, 'Nobody wins when the family feuds,'" iHeartRadio reported.

It's a good metaphor — but the video of Bey watching JAY-Z rap his heart out in the confessionals at church, and the way he mentions being able to "f*ck up a good thing if you let me," makes the song sound less symbolic as a commentary on rappers than a real story about his marriage and family with Bey.

But, regardless if you want to dissect his marriage with Beyoncé through the lyrics or rap culture, one thing's certain — there's not a lot here to say this song has anything to do with Solange. Back in 2014, after a surveillance video of JAY-Z, Beyoncé, and Solange Knowles in an elevator went viral, everyone assumed there was major trouble brewing between Solange and her brother-in-law. CNN reported that the video showed Solange taking a few swings at JAY-Z as they attended the Met Gala, but she also kicked at him with Beyoncé standing calmly next to her. A joint statement released after the incident claimed that the family was fine, that both Solange and JAY-Z took responsibility for the incident, and that there was nothing really left to say. But fans weren't so sure. Once rumors about infidelity started swirling, everyone assumed that Solange had heard that JAY-Z cheated and took that moment to release her anger.

US Weekly reported earlier this summer that fans were already speculating that JAY-Z's new album, 4:44, was in reference to the fight. Apparently 444 is the address to the rooftop bar where the scuffle took place, and JAY-Z even mentions Solange in one of the songs on the album, "Kill Jay Z". If the theories that the fight between Solange and JAY-Z started because she was angry about him cheating on Beyoncé, it really could have been the inspiration for the entire 4:44 album.

Or it could just be in reference to the rap family and culture like JAY-Z said before. Regardless of what the song is actually about, the video is pretty damn phenomenal and worth all eight minutes.