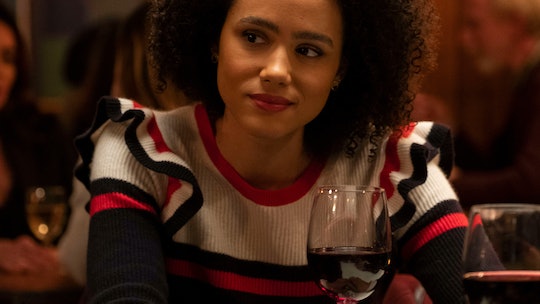 Mindy Kaling is the queen of modern-day romantic comedies, and no one can tell me otherwise. Her work is often influenced by classic rom-coms from the '90s and early 2000s. And now, Kaling has attached her name to Four Weddings and a Funeral, a 10-part Hulu series that hopes to exude the same charm as 2013's The Mindy Project. But is the new Four Weddings and a Funeral based on the movie by the same name? As it turns out, Kaling's latest show was inspired by the 1994 film. However, Hulu's TV adaptation of Four Weddings isn't exactly a shot-for-shot remake, as it only follows the structure of the Academy Award-nominated movie.

In an interview with The Wrap, Rebecca Rittenhouse, who plays Ainsley in the series, explained the key differences between the Four Weddings adaptation starring Game of Thrones' Nathalie Emmanuel versus the original starring Hugh Grant.

"The TV adaptation is really a reimagining of the original and the characters are not exactly parallel and Four Weddings and a Funeral is really used as a structure," Rittenhouse said. "So it’s about four American friends living in London and over the course of their story, four weddings and a funeral happen. So it’s really just about friendship, love and big life events."

Although these differences might turn some fans away from the Four Weddings "reboot," Kaling wasn't interested in simply remaking the film — she wanted to create something new.

"I loved the movie and I think the movie is completely perfect, so at first I wasn’t completely sure I wanted to do it," Kaling told the Los Angeles Times. "But then, when I was looking at it through the lens of how I see London and the sort of people I know there, I thought, ‘OK, that could look different. That might be worth doing. The only reason to do something like this was to show things I have not seen in romantic comedies before."

In the case of the Four Weddings remake, this meant a new lineup of diverse characters and actors. While the 1994 classic was, well, overwhelmingly white, Kaling's vision of Four Weddings tries to embrace inclusivity, as the story is led by the romance between a black woman and a Pakistani man.

When speaking to the LA Times, Nikesh Patel, who plays Kash, touched on the importance of a diverse cast within Four Weddings.

"The casting of this show is making the point that whatever you look like or wherever you’re from, when it comes to love, it makes fools of us all," he said.

The Hulu adaptation of Four Weddings might branch away from the source material, but it still pays tribute to the original. Deadline reported that the series contains Easter eggs from the classic Hugh Grant film, along with other London-based rom-coms such as Love, Actually and Notting Hill.

"We were hoping with our show that it would be an opportunity to pay homage to some of these moments that you love so much," Kaling said.

Four Weddings and a Funeral premieres Jul. 31 on Hulu.