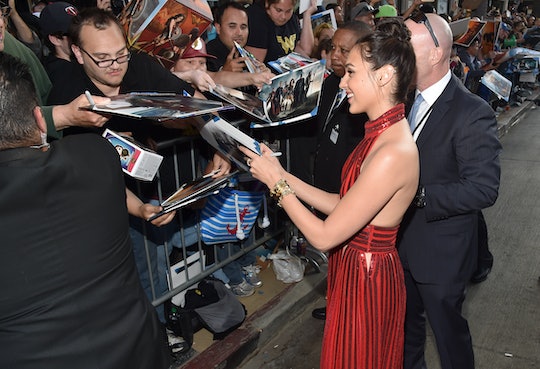 Is Gal Gadot A Feminist?

Nearly two weeks into its release, Wonder Woman is continuing to dominate, now having brought in a whopping $221.4 million at the box office in the United States alone, according to Fortune. That would be a big deal for any film, but after years of naysayers claiming that moviegoers just aren’t that interested in female superheroes, it’s also a sign that the female-directed and female-led movie has pretty much entirely put that notion to rest. It’s not exactly a stretch to see why Wonder Woman’s success is a win for feminism but many have wondered what the film’s star personally thinks about women’s rights. Is Gal Gadot a feminist? Not all celebrities feel comfortable discussing feminism in interviews, but thankfully, Gadot is more than happy to share her views on the importance of gender equality.

In addition to being a badass on-screen, the Israeli actress also seems like a total boss off-screen, too. Prior to pursuing her acting career, the one-time Miss Israel spent two years in the military — a fact that no doubt helped when she began training six hours a day for six months to prepare for the film, according to People. On top of that, the mom-of-two (who has long had a reputation for her incredible work ethic) also managed to shoot the demanding film while pregnant with her youngest daughter, Maya, who was born in March (no big deal).

In an interview with Glamour in March, Gadot spoke about what it was like to take on the role of the iconic female superhero, and explained that she wanted to portray the character as a strong, independent woman. Gadot said,

[It] was important for me that we show how independent she is. She is not relying on a man, and she's not there because of a love story. She's not there to serve someone else.

But while it’s almost a given that Wonder Woman would have to be able to hold her own in a world of dudes, Gadot also told the magazine that, it was just as important to her to show the character’s emotional side:

She has so many strengths and powers, but at the end of the day she's a woman with a lot of emotional intelligence. She's loving … And it's all her heart—that's her strength. I think women are amazing for being able to show what they feel. I admire women who do. I think it's a mistake when women cover their emotions to look tough. I say let's own who we are and use it as a strength.

That seems, in a way, like a pretty radical thing to say — when you’re faced with trying to prove that a female superhero could be just as strong and impressive and interesting as the long line of beloved male characters we’ve all grown up watching, playing up Wonder Woman’s emotional side almost seems like a gamble. But if there was any doubt about Gadot’s stance on feminism and supporting gender equality, she made her position pretty crystal clear later in the interview.

Addressing some of what she felt were the “misconceptions as to what a feminist is,” Gadot told Glamour that, as far as she was concerned, it really all just comes down to equality, and things like equal pay for equal work. And when asked again about her take on feminism, this time by Entertainment Weekly, she didn’t hold back:

Wonder Woman is a feminist, of course. I think people have a misconception about what feminism is. People think hairy armpits and women who burn bras and hate men. That’s not it. For me, feminism is all about equality and freedom and [women] choosing what we want to do. If it’s salaries, then we get paid equal to men. It’s not men vs. women or women vs. men.

What’s more is that Gadot has also stressed the importance of feminism not just for girls, but for boys, too. According to TIME, in 2015 Gadot told a young boy at Comic-Con who had revealed he’d been bullied for liking Wonder Woman that the fact that he wasn’t afraid to support women actually made him “more of a man.” And in December 2016, she explained to TIME that boys need to see strong role models, and said, "We need to educate boys, show boys strong women in powerful positions. It's all about expanding the possibilities of what women can be.”

Hearing Gadot unapologetically speak about feminism is so important, in part because so many people are majorly intrigued by her and are listening to what she has to say. By playing Wonder Woman, Gadot has already provided a pretty solid example to an entire generation of young people of what a strong female character can look like. But by going beyond that, and by personally endorsing feminism and equality, she has also shown those same young people that feminism isn’t something you should be ashamed to believe in, or talk about.

There’s still a lot about feminism that could be discussed in relation to the film — there was still, of course, much discussion of Gadot’s looks, body size, and breasts, and as writer Cameron Glover aptly noted in Harper’s Bazaar, there’s the even more important fact that Wonder Woman still largely ignored women of color. But a time when the word itself still continues to be stigmatized, the movie, and Gadot’s comments, are still majorly important, and are hopefully a step in the right direction.