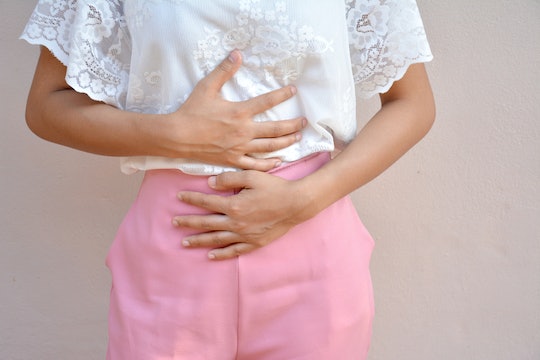 You Might Be Extra Farty Because You're Pregnant — There, We Said It

I recall that my digestive system was a little, shall we say, out of whack shortly before I discovered I was pregnant with my daughter. I'd duck into unoccupied aisles in the supermarket or public bathrooms to let out a little poot when no one was around. But if I'd known that bloating and gas can be a sign of pregnancy, I might have just embraced my quirky gut and let the farts fly. If anyone had given me the side-eye, I would have said, "Sorry about that, folks, but to paraphrase Tennessee Williams, 'This girl's got life in her, and that's no lie!' "

Our bodies have some interesting ways of letting us know that there's something going on inside. From the hair growth and mood swings of puberty to the hot flashes of menopause, the symptoms alert us to the changes. Coping with them is a different story, but at least we understand that there's a reason behind the internal quirks.

In this case, gas in early pregnancy can be embarrassing, but it's also absolutely normal. As The Bump explained, it's because the hormone progesterone relaxes the smooth muscle tissues in the gut, which helps allow your body to feed the growing baby.

Unfortunately, the extra progesterone also causes your digestion to slow down by up to 30 percent, resulting in increased gas and bloating, according to the American Pregnancy Association. We normally pass gas about 18 times a day (yikes! That's a lot of ripe air!), but during pregnancy, you may find yourself doing it more often.

There's not much you can do to avoid this particular symptom of early pregnancy, but you can keep it under control using many the same techniques you would if you weren't expecting. For instance, try chewing your food more slowly, which will keep you from swallowing excess air.

The American Pregnancy Association also suggested keeping a food diary to see whether there are any particular foods that seem to trigger your gas more than others. Sodas and other carbonated drinks are a common culprit, as are fried foods, cruciferous vegetables like broccoli and cabbage, and of course beans (their "musical fruit" rep is notorious).

Exercising is another good way to keep the gas at bay, both when you're pregnant and after the baby comes. A daily walk around the neighborhood is not only good for your digestion, but also for your overall health; plus, it's an opportunity to let a few farts rip without anyone being the wiser.

Should you run out to CVS for a pregnancy test if you're suddenly feeling bloated and gassy? Not necessarily. As the Mayo Clinic noted, gas can mean a number of things, from the simple to the more serious. If you've changed up your eating habits to include more veggies and whole grains, your digestive system might be adjusting to the added fiber. If you're experiencing other symptoms along with the gassiness, though, such as a change in the consistency or frequency of your poop, or unexpected weight loss, that's a sign that you need to call your doctor. (Severe stomach or chest pain should always be treated as an emergency.)

On the other hand, if you've been trying to conceive for a while, and you're noticing other telltale signs such as a missed or light period, nausea, and breast tenderness in addition to the fartiness and tight pants, it wouldn't hurt to do a check just for curiosity's sake. If you get the news you've been waiting for, then you have a perfect excuse the next time someone sniffs the air and wrinkles their nose near you. "Sorry about that — this baby is determined to turn me into a fart machine!"