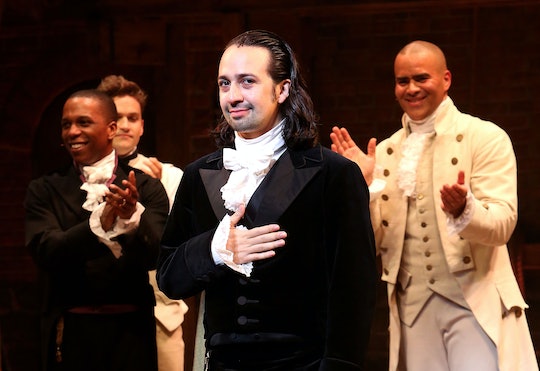 The struggle to strike the right balance between exposing your kids to culture and protecting them from mature themes is a tough one. But I have good news for anyone wondering if Hamilton on Disney+ is appropriate for kids: Lin-Manuel Miranda did more than his part to make it easier for families to watch together by allowing a couple F-bombs to be dropped.

The wildly popular Broadway musical about founding father Alexander Hamilton has now been turned into a film that is set to drop on Disney+ on July 3. The movie, which was filmed in June 2016 over three days and features the original cast, was originally slotted to be released in October 2021, but due to the coronavirus pandemic Disney decided to release it for streaming on Disney+ in July.

This means that those of us who never managed to get their hands on the famously difficult-to-come-by tickets will actually be able to experience the real deal from the comfort of our own homes. And apparently we can watch it with our kids too because the film was given a PG-13 rating rather than an R rating.

After a fan asked the Hamilton creator if the Disney+ version been "changed at all" due to its rating, Miranda wrote that fans are "getting the whole show, every note & scene, & a 1-minute countdown clock during intermission (bathroom!)" starting on July 3. He also explained that because the "MPAA has a hard rule about language," they opted to mute a few curse words. "More than 1 utterance of 'F*ck' is an automatic R rating."

Or as Miranda put it, "I literally gave two f*cks so the kids could see it."

As such, Miranda said on Twitter that "there's a mute over 'I get the f___ back up again'" in "Yorktown" and in the verse "southern *record scratch*kin' Democratic Republicans."

"You can sing whatEVER you like at home (even sync up the album)! Love you. Enjoy," Miranda tweeted.

This is, of course, good news for parents who might want to sit down to enjoy the award-winning Broadway show with their kids. According to Common Sense Media's review, kids 11 and older are probably the best demographic for Hamilton, considering some of the more complicated themes of death and some sexual references about Alexander Hamilton's affair with Maria Reynolds that might not be appropriate for younger kids.

That being said, the removal of some of the curse words should make it more kid-friendly for younger theater fans, too. And let's face it; the music is so amazing you might want to share it with your kids. Especially now that Lin-Manuel Miranda "literally gave two f**ks" so kids could also enjoy it.