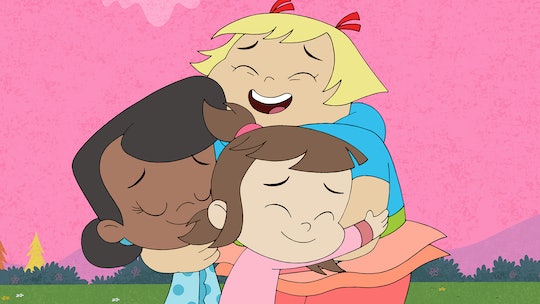 Harvey Street Kids seems to tick all of the boxes to become your child's next favorite television show. Animation? Check. Bright colors? Check. A world where adults don't exist and kids rule? Double check. Now titled Harvey Girls Forever, the Netflix original series is gearing up for its second season on May 10. But is Harvey Girls Forever appropriate for kids under 10? Looks can be deceiving when it comes to animation, but luckily for you — and your children — the show based on Harvey Comic characters is part of Netflix's family friendly selection.

According to the show's iMDB page, Harvey Girls Forever has a TV-Y7 rating, which means the show may be unsuitable for children under the age of seven. Per the TV Parental Guidelines Monitoring Board, a TV-Y7 rating is given to any program that may "be more appropriate for children who have acquired the developmental skills needed to distinguish between make-believe and reality." Since Harvey Girls Forever follows the lives of children who run on never-ending games and infinite ice cream, the Netflix series can over-exaggerate aspects of childhood adventures. While this is what makes the show entertaining, younger kids may not see the differences between their reality and the make-believe world of Harvey Girls Forever.

Common Sense Media also agrees that Harvey Girls Forever looks appropriate for kids who are 7+. Per the website, there's a bit of "potty humor" such as boogers and spitballs, as well as "playground talk" like jerks and "butt sandwich," so the publication recommends that you consider these, as children often will repeat what they hear. The website also adds that while there aren't a lot of learning opportunities in the show, Harvey Girls Forever is still a fun and playful experience.

That being said, Harvey Girls Forever isn't limited to children. Who knows? You may find yourself watching along with your kid. Per Collider's review of Season 1, the Netflix original has quite a bit of 90s nostalgia elements and imaginative storylines that will not only keep your attention, but also pull you back into your own childhood experiences.

Now with Harvey Girls Forever Season 2 just around the corner, Netflix has released a few details in regards to what's coming next. According to the official synopsis provided by Collider, best friends Audrey, Lotta, and Dot are back with more challenges to keep Harvey Street "kid-rules and adult free," even when they come face-to-face with their older siblings. The girls also get the opportunity to meet their favorite boy band, Crush 4 U, which could potentially change Harvey Street forever.

In the trailer for the second season, Netflix teased a few new colorful adventures, including what's to come when Crush 4 U arrives in Harvey Street. The scenes are filled with all the excitement that comes with fangirling over boy bands. And as a 20-something who has been obsessed with BTS since she saw them at the Rose Bowl, I'm so here for it.

Yes, Harvey Girls Forever is appropriate for most children over seven. It's a fun — but harmless — comedy that will probably have your kids singing along and gearing up for their next adventure.

Harvey Girls Forever will be released May 10 on Netflix.