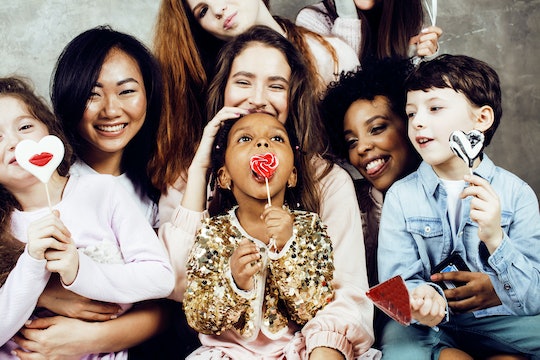 Is Having A Baby In Your 20s Versus Your 30s So Different? Moms Get Real

Stereotypes abound about young millennial moms and their supposed polar-opposite: old millennial moms: We are told that 20-something mothers are less career-driven, tend to live in rural/suburban areas, and sail through the physical parts of motherhood (like conception, postpartum recovery and keeping up with rowdy kids) with total ease (see: Kylie Jenner). Stereotypes say 30-something moms are highly educated, ambitious big city types who planned their lives (and pregnancies) down to the wire (see: The Duchess of Cambridge, Kate Middleton).

But is the experience of becoming a mom in your 20s really so vastly different from that of waiting until your 30s to have kids? And, more importantly, do moms in each of these groups think those stereotypes hold any merit? We spoke to a few women from both groups to learn more.

“My goal was to travel, buy a house and all that [before we had kids],” says Nikki Liu, 27, who had her first baby at 24 years old. “I think the majority [of 30-something moms are] waiting to have a set career. I felt the same way. My pregnancy wasn’t planned. My goal was to keep working, get situated before having a family.”

Things didn’t work out that way, and while Liu said she was shocked by how quickly she quickly she grew up after having her children, she admitted that young motherhood wasn’t a walk in the park. “Having kids early… you’re not ready. I wasn’t ready. It [created] struggles in my marriage,” she says. “It made our relationship rocky for a year or two and I think we could have been more prepared mentally, physically and emotionally [if I had waited till my 30s].”

On the flipside, Carolyn Pelissero Moretti never expected to put off motherhood until she was 35, but infertility determined her timeline, to some extent. “I think when you’re in high school you think ‘I’m going to be married and have my first kid by 25,' and I look back and laugh at that now. I don’t think I’d be anywhere prepared 10 years prior. I don’t think I would have been ready in my 20s. I think I would have missed out on a lot of growing up and social experiences.”

It’s more isolating, especially when you’re in your 20s, you’ve just graduated college and everyone still is in that fun going-out stage. — Micala Quinn, 28

Jené Luciani, a 40-year-old writer who had her first child at 32, agreed with the benefits of entering motherhood in your 30s, which was something she always envisioned herself doing. “I try not to be a judgmental person but, knowing what I know, for me, if I were giving advice right now [I would say] ‘take your time, do it your 30s.’ I think women in their 30s are definitely more mature and able to handle it,” Luciani says. “It is a huge, life-changing responsibility. Not to say there aren’t women in their 20s who [can] handle it, but looking back, I just think you’re so young in your 20s.”

Luciani adds that she really doesn’t know any mothers who are in their 20s, which brought up the idea that there isn’t always a ton of mingling between 20-something and 30-something moms. Women from both groups admitted they find it easier to relate to other moms who had kids in the same decade as they did.

Exceptions do exist, though.

Having a baby young in an era in which women are putting off child-rearing longer, it can be hard to find other 20-something moms.

“It’s more isolating, especially when you’re in your 20s, you’ve just graduated college and everyone still is in that fun going-out stage,” Micala Quinn, who became a mom way before any of her friends, tells Romper. Quinn had her first child at 25, and socially, being a young mom presented some challenges. “We were the only ones in our friend group for the longest time to have kids.”

The moms cited financial, career and interpersonal benefits of having kids in your 30s… but they also called out some clear benefits to being a 20-something mom.

“You have to be youthful to keep up with kids,” Luciani says. “We talk about how when our kids are X age we’re going to be X age. My mom was 22 when she had me so she’s a young mom now. When my son is 40, I’ll be a lot older than that. When you’re younger you’re able to grow up with them a bit more.”

The point? There’s really no “right age” to become a mom.

You’re thinking of reasons [to be glad you didn’t wait until 30] even if secretly you’re kind of scared you didn’t. — Kierstan Gunsberg, 28

Kierstin Gunsberg always thought she’d start trying to have her first baby in her late 20s or early 30s. Instead, she had an unplanned pregnancy and gave birth at 24.

“Getting pregnant at 23… I wasn’t that far away from my teen years. You kind of justify it: You’re like ‘oh I’m glad I did it now because I have the energy for it’, even if that’s not necessarily true. You’re thinking of reasons [to be glad you didn’t wait until 30] even if secretly you’re kind of scared you didn’t,” she says.

“I think in a weird way I might even feel a little bit jealous of [women who wait until their 30s.] It’s not that I regret that I had kids in my 20s but I’m like ‘you had more time to figure your stuff out. You graduated from college, you established yourself,’” Gunsberg adds.

That envy seemed to work both ways. “I think there’s a little envy [towards younger moms],” Pelissero Moretti says. “They got it done in prime time, fertility-wise. But I also think you might miss out on experiences that are pretty great. The grass is always greener, right?”

There appeared to a level of mutual admiration between the two groups as well. “I actually really admire [moms in their 20s],” Emily Yeap, who had her first child at 35, tells Romper. “Looking back now I don’t think I would have been ready at that time. I have a lot of admiration for them because they made a difficult choice but they still manage to work out something that fits for their families.”

In talking to these women, it was clear that both groups do, to some degree, buy into the stereotypes. They viewed women who become moms in their 30s as ambitious and financially savvy; while moms in their 20s were seen as more family-oriented — but maybe it isn’t really about that.

I think once you’re a mom — if you were expecting it or if you weren’t — it’s just this completely new love. — Pelissero Moretti, 37.

Differences aside, many of the moms agreed that society overstates the distinction between 20-something moms and 30-something moms, saying that in many ways, the experience of motherhood can be universal.

“I think once you’re a mom — if you were expecting it or if you weren’t — it’s just this completely new love,” Pelissero Moretti says. “That’s shared through all moms regardless of age. I think 20-something moms and 30-something moms can still have a lot in common because they’re all rock stars.”